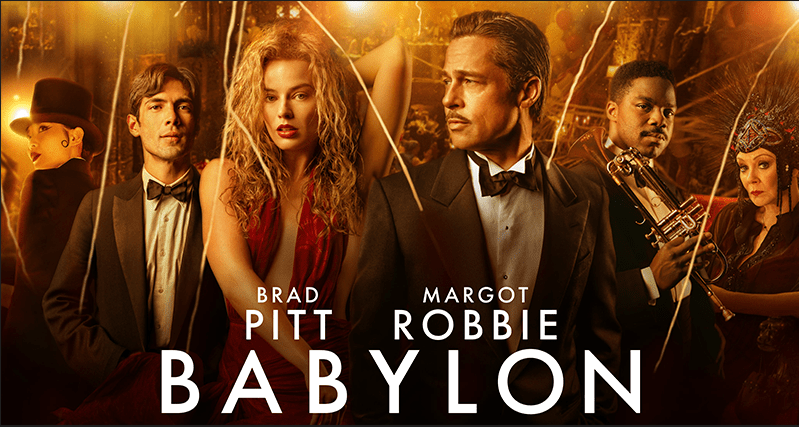 Damien Chazelle has finally released his much anticipated fifth film, “Babylon”. The director has garnered a passionate audience through his work in 2014’s “Whiplash” and 2016’s “La La Land”.

I fell in love with Manny and Nellie as soon as they appeared on screen. They’re shared ambition and passion for art made their eventual downfall painful to watch.

Casting Brad Pitt as Jack Conrad seemed like such a great choice. He represents carrying on the legacy of Hollywood superstars.

All the performances in this are incredible. Robbie crying on command, wiping her eyes, crying again, over and over, was such a ball to watch. Even supporting roles like Jean Smart’s Elinor St. John impressed me.

Chazelle’s films typically have music at their heart, and “Babylon” is not excluded. With yet another masterful score from Justin Hurwitz, the viewer is immediately transported into the roaring 20’s.

The opening sequence of “Babylon” is breathtaking. The camera whips from lively dancing to a screaming band to vibrant costumes and bursting champagne bottles. Immediately, Chazelle lets us know what kind of ride the viewer is in for.

I adore the iconic whip-pan of cinematographer Linus Sandgren (who also worked on “La La Land” with Chazelle). It gives each scene energy that is crucial in a film this long.

“Singin’ in the Rain” was the movie that first made me fall in love with cinema. Knowing this is an ode to such a beloved film made me appreciate it even more.

The only issue I really had came at the end. I think Chazelle could’ve omitted the final movie montage. Did we need a clip of “Avatar” in this? Probably not. It also seemed very surface level and obvious. Like, “look guys this is an ode to cinema!”. We really didn’t need to be told that, the audience is smart enough.

I thought seeing Manny watch “Singin’ in the Rain” and being reminded of Nellie was sweet, and his nostalgic tears should’ve been the final shot.

Addressing the LGBTQ+, Black, and Latinx populations involved in filmmaking during the golden age of Hollywood was awesome to see. I love how Chazelle didn’t glorify anything. He showed how nonconforming people were ostracized, how that led individuals to change their identity in order to succeed.

There have been a lot of poor reviews due to the movie’s length. I argue that, during my watch, I personally didn’t notice the run time considering there was always something happening. “Babylon” is saturated with excitement. The last act dragged a little, I’ll admit, but otherwise I was happy to endure the runtime.

How can you say a movie is slow when the last hour is spent with Tobey Maguire luring the protagonist into a murder cave sex dungeon with a giant man feasting on live rats. In addition to the creepy set, underneath it all is the anticipation of doom connected to Manny’s exchange of prop money with a deadly gang.