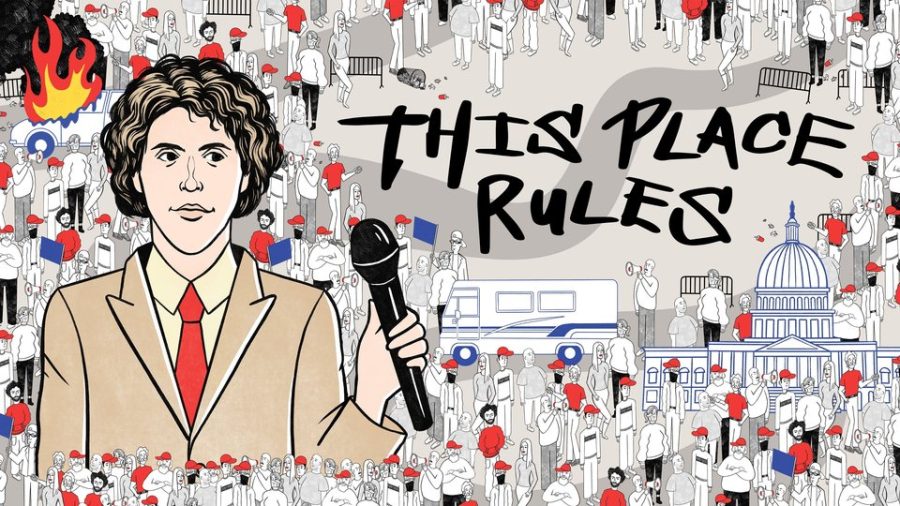 “This Place Rules,” the long-awaited directorial debut of internet sensation Andrew Callaghan was released on December 30 for streaming on HBO Max.

Callaghan is one of the most prominent figures when it comes to online journalism, having created two multi-million subscriber YouTube channels, “All Gas No Brakes,” and “Channel 5 with Andrew Callaghan.”

Callaghan rose to fame with his YouTube channel “All Gas No Brakes,” where he would attend events such as alt-right rallies and spring break beach events, interviewing the colorful cast of characters you could find there.

Right in the middle of what many would’ve considered to be the peak of popularity for “All Gas No Brakes,” the uploads to the channel suddenly stopped.

After many months of fans of the channel waiting for the newest upload, a statement was released by Callaghan.

“I am no longer associated with All Gas No Brakes,” his Instagram post read. “I no longer receive any of the Patreon crowdfunding, YouTube monetization, or any other income. My team, Nic and Evan, who lived in the R.V. and created the original material with me, are also no longer involved. We have no control over any AGNB pages or future of the show.”

The ostracization Callaghan experienced from the channel he had almost single-handedly built was caused by constant contractual disputes with the company that owned “All Gas No Brakes,” Doing Things Media.

“I signed a contract without reading it, lesson learned” said Callaghan.

“Channel 5 with Andrew Callaghan” was introduced one month after his split from “All Gas No Brakes” and Doing Things Media. Callaghan found immediate success with his new channel, with the first video he uploaded, “Miami Beach Spring Break,” having 4.5 million views as of January 2023.

This contract revolved around the production of the documentary this review is focused on, “This Place Rules.”

Released on December 30th, 2022, for streaming on HBO Max, “This Place Rules” is a documentary film which follows Andrew Callaghan’s travel across the U.S during the months leading up to the January 6th riot at the U.S Capitol.

During this film Callaghan visits a wide variety of settings and interacts with an even wider variety of people.

An example of this that sticks with me the most is his series of interactions and interviews with the “Q Family,” a family of Q-Anon believers, Q-Anon being another alt-right conspiracy theorist group.

It is genuinely shocking to hear a child saying that the food at McDonalds is made of “ground up people” and even crazier to see that child’s older brother yelling “Joe Biden is a pedophile!” as he waves a Trump flag in his front yard, but moments such as these are what make this documentary so interesting.

With “This Place Rules,” Andrew Callaghan is expanding upon what he has been doing for years on his YouTube channels; exposing the broader public to parts of America that aren’t seen within mainstream media.

Overall, I believe this is an incredible directorial debut from Callaghan. His incredible interviewing skills, the interesting people and places featured throughout, and his ability to take his short-form content and extend it to a feature length film, without losing any of the fun and excitement found within those videos, all add up to a documentary that I would recommend everyone watch.

Shortly following the release of “This Place Rules,” numerous women brought to light allegations of sexual misconduct towards the creator of this documentary, Andrew Callaghan.

Since then, Callaghan has addressed the allegations, and stated that he is “going to start therapy sessions pretty much immediately” in order to address his grossly inappropriate behavior.