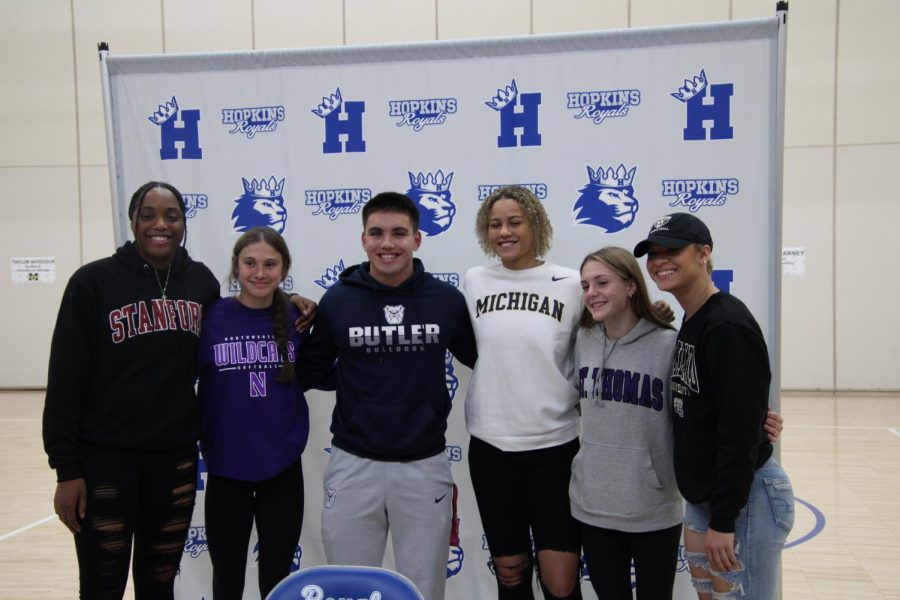 This year’s National Signing Day for D1 athletes took place on November 9. This is a monumental event for any high school athlete preparing to play at the next level, as they sign letters of intent for the schools they already committed to and take the final step in pursuing their athletic scholarships. Six HHS athletes participated in this year’s National Signing Day.

The first athlete who gave a speech and made it official was soccer player Abby Hoiska, senior. She decided to stay in Minnesota, committing to the University of St. Thomas in Saint Paul. Defenders could not keep up with her speed on the field, as Hoiska was a major part of the Royals girl’s soccer team’s second-place finish in sections.

“I chose St. Thomas because I wanted to stay in Minnesota,” Hoiska said in her speech. “It’s a really great school and has a great campus.”

After Hoiska, baseball player Drew Charney, senior, signed his letter of intent to continue his career at Butler University in Indianapolis, Indiana. The catcher has battled through adversity on multiple occasions, suffering elbow injuries that have forced him to get surgery multiple times. These injuries have not held him back, as he played a major role in the Royals baseball team’s successful season last year.

“After watching Butler practice and seeing how championship driven they were, I knew that’s where I wanted to be,” Charney said in his speech. “Getting to watch Big East basketball in the Hinkle Fieldhouse isn’t a bad perk either.”

The third athlete who will continue their athletic and academic career is softball star Signe Dohse, senior. She gave an emotional speech, praising her family, former coaches, and teammates who have assisted in her journey. She will spend the next 4 years playing softball at Northwestern University in Evanston, Illinois.

“I chose Northwestern because ever since I fell in love with getting dirty out on the field, I wanted to see how long my love and drive could take me,” Dohse said in her speech. “I believe that Northwestern gives me the opportunity to grow, where I can work to discover who I am academically, athletically, and as a person.”

The spotlight in the second half of the event was given to three players from the state-champion girls basketball team. Jasmine DuPree, Nunu Agara and Taylor Woodson, seniors, who have been on the varsity team for years, also signed their letters of intent. DuPree was the first girls basketball player to speak and sign, announcing her commitment to Oakland University in Rochester, Michigan.

“My parents always paid for me to play basketball during AAU, and basketball is expensive,” DuPree said in her speech. “I always felt indebted to them, and Oakland gave me the opportunity to attend college without my parents paying.”

Next was Agara, who confirmed her commitment to Stanford University in Stanford, California.

“This road has not been easy for me. I’ve been cut from teams, I’ve battled through a lot of stuff, I’ve been told I wasn’t good enough and wouldn’t make it, but look at me now,” Agara said in her speech.

Woodson finished the day with her commitment to the University of Michigan in Ann Arbor, Michigan.

“Michigan just feels like the right place for me. I am super excited to be a part of the Wolverine family,” Woodson said in her speech.

November 9th was an exciting day for all of the athletes and their families, as making it official is a huge step in their athletic journeys.