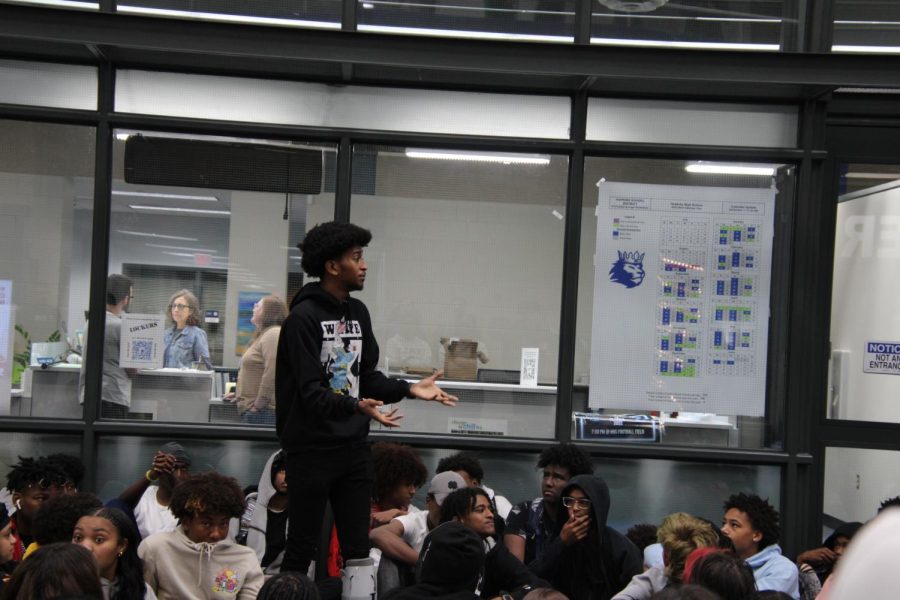 Murad Essak, senior, voices his opinion on administration’s handling of the altercation that occurred with Mr. Deangelo Hammond, administrative services.

On the evening of Thursday, September 15, a post regarding an incident with Mr. Deangelo Hammond, paraprofessional , and a group of Muslim girls in the prayer room circulated throughout the HHS community.

Murad Essak, senior, posted a story on Snapchat briefly explaining that he and Taylen Fletcher, senior, attempted to stand up for these girls, which allegedly developed into another altercation between themselves and Hammond.

Many Muslim girls report struggling with Hammond’s behavior since the start of school. It had reached its peak on Thursday as they said he had been cutting off their prayer time by barging in, making them pray in front of him and in the corner of the room; Muslim boys, who also had their prayer passes, did not report the same issues.

Along with this men and women are encouraged not to intermix, especially during times of worship which is why the boys and girls pray separately, but admin still permitted a male para to supervise.

The group of Muslim girls and some boys called Assistant Principal Taneisha Smith and Ms. Fatuma Ali, ELA, after Ali was also called the day before, to help de-escalate the situation; to which Smith allowed them to pray and stood in front of the door.

When Essak and Fletcher confronted Hammond over how they believed the girls were being treated, he allegedly threatened Essak. This caused an escalation to which Essak also made threats and both were asked to not return to HHS the next day.

In the post, he stated that though administration did not want him to attend school the next day, he would anyway.

Principal Crystal Ballard sent an email to students in the middle of first block on Friday. She stated that the auditorium would be open for discussion regarding the situation throughout the school day.

Essak decided to come to school after being told he was suspended Friday morning, and a sit-in began during second block in solidarity with him as well as to discuss the situation. Administration allowed it to continue till the middle of fourth block. Students involved in the altercation and outside of it asked questions and expressed their opinions about how the school deals with similar conflicts.

The sit-in addressed not just the situation with Hammond, but the issues that many Muslim students face within HHS regarding their prayer time and the lack of action taken by the school to protect it.

Ali and Ms. Nathalee Morse, paraprofessional, were two of the main staff members who helped develop the prayer pass plan. Though Ali felt it should not have been necessary to do so, she felt it a responsibility as one of the few Muslim staff members.

Ali and Morse are teachers that many students find refuge in during these situations. Ali believes this is because of the relationship she has worked to develop with students and encourages other teachers to do the same for their concerns to be addressed appropriately and make more sit-ins unnecessary.

“Several students tried to confront him (Hammond) about it, and he escalated the situation in every form,” Ali said. “One of our students was suspended this morning for responding to the aggression he was receiving.”

She believes that changing how these situations are handled is needed to prevent HHS from a constant battle between students and staff.

“Trust and faith need to be restored,” Ali said. “That is not going to happen until students feel like their safety is a priority for the school. We have to be very clear about somebody who is responding to aggression and somebody who is an aggressor. We can’t treat both groups the same.”

Ali explained that the constant power imbalance between students and staff must be considered when dealing with altercations between the two before any fair action can be taken.

The main theme throughout the sit-in was the lack of love, support and safety that students feel within HHS, as well as what the best solution would be to de-escalate these situations and similar ones that may occur.

“I basically want to see them (staff) bond with students better than this,” said Nimet Abubakar, junior, who was directly hurt by the actions of Hammond in the prayer room. “When I spoke about it around fourth block no one wanted to do anything about it until later on when he (Essak) had to be threatened.”

Abubakar, along with other girls affected by Hammond’s actions, expressed feeling ignored by administration and feel that their opinions are being disregarded as not just students but women as it required their male peers to stand up for them and face threats for any type of valuable attention.

“It makes me feel sad,” Ballard said as she responded to students who expressed a lack of support within the school community.

Abubakar and others hurt by the incident feel that Ballard’s response was disingenuous or not enough, especially after it took a student’s request for Ballard to formally apologize for the situation that occurred.

Other staff members have refused to comment on the effectiveness of Ballard’s words and actions. Still, Ali explained that a lack of transparency between administration and staff has made it more difficult for teachers to provide any true support for their students.

The sit-in was a place for those affected to speak up, but Ballard did not provide any concrete answers to the list of demands developed by the affected students, one of which was that Essak no longer be suspended.

Ballard has informed students that circles will be available throughout the day on Monday for their voices to be heard once again. Along with the circles, Student Body President, Abhinav Kumar, senior, encouraged students to attend the upcoming school board meeting to voice their concerns once again.