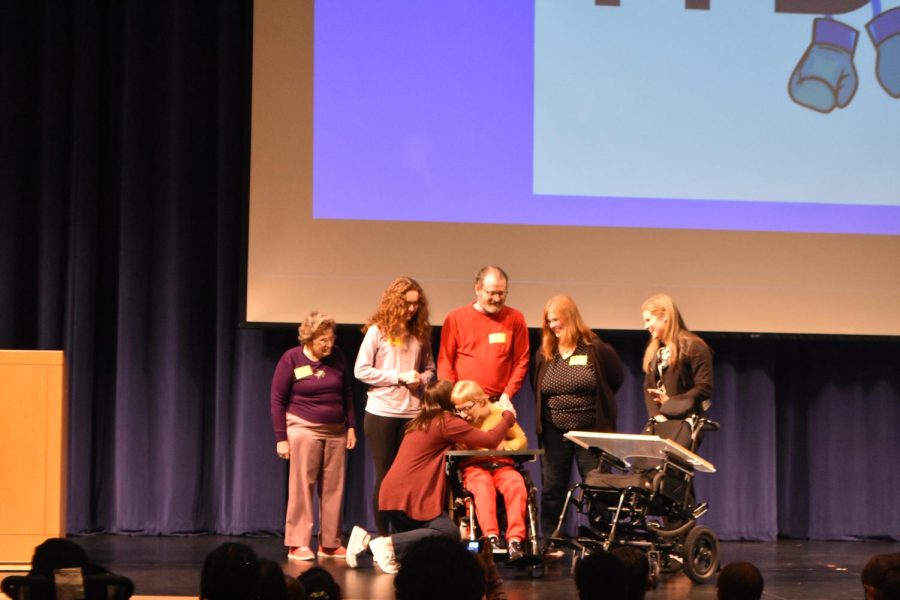 Ashley Beard, sophomore, was in fourth grade when she was diagnosed with juvenile Huntington’s disease.

The genetic disorder slowly causes cells in the brain to deteriorate. Experiences vary amongst patients. Often, simple acts like eating or walking can become impossible. Many suffer from mental health problems in addition.

Huntington’s is a terminal illness, and research on it is limited. No cure has been discovered yet.

This lack of assistance for those affected by Huntington’s is exactly what led Shelby Lentz to start her nonprofit organization: Champions for HD.

“There’s so many issues when it comes to Huntington’s disease as far as accessibility and care,” Lentz said. “Disability in itself can take up to two years to get approved.”

In just four years, she’s managed to raise around $60,000, helping over 70 families in their battle with the devastating disease.

“We raise money for science and research, and also for families who need help and assistance; whether it’s genetic testing, a wheelchair, paying medical bills, or even just groceries or electric bills,” Lentz said.

Lentz was diagnosed with adult onset in 2015. Her sister tested positive for the juvenile form the following year, when she was only 11 years old. Lentz says her sister’s life is one of the driving forces in her fight for those suffering from HD.

“It’s been a rocky road, but she’s honestly the reason I keep persevering,” Lentz said.

Now, Lentz’s work is extending to HHS as well.

Ashley Beard has lived with HD for almost six years. Over the past few months, her Huntington’s has progressed. It’s more difficult for her to support her head, eat, drink, and complete her school work. Her chair simply wasn’t meeting her needs.

Judy Griffin, Special Ed Teacher at HHS and one of Beard’s caretakers, has struggled providing for her students with the current budget HHS is providing.

“Like every department, we are lacking funds and the supplies we need,” Griffin said.

Compass recently received a grant from the Hopkins Education Foundation, which has created new opportunities for the program. Still, wages for paraprofessionals are lacking, which in turn makes finding people fit for the position difficult.

“What we need more than anything is support staff (paras),” Griffin said. “It is very hard, because this program requires people who possess very specific skills. I do wish that they would offer higher pay to beginning staff and bring the staff that is currently working up to a competitive wage.”

Beard’s HD has progressed rapidly since she arrived at HHS in 9th grade. Just a few years ago she could speak coherently, walk with assistance, even play tag with her classmates. Now, this movement isn’t possible.

This is exactly what makes a new chair so vital.

Members of Beard’s family arrived at the auditorium expecting her to receive an award. Instead, a shining new wheelchair was presented.

The sharp contrast between the chair she had been using before, and her sparkling new one was shocking. On her old wheelchair, an arm was missing. She would have to transfer between her home and school chairs before. Now, this transfer isn’t necessary.

The new chair provides ample shoulder and neck support, as well as special shock absorption cushions. It even tilts back when Ashley gets tired over the course of the day.

She immediately wanted to try the new wheelchair. It was her favorite color, black.