House of Gucci: A Time-Capsule 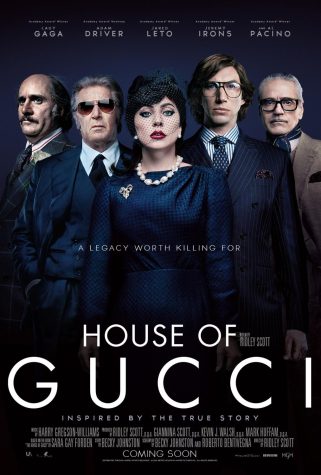 It’s a scarce and powerful feeling to be able to dissociate from reality while simply watching a movie. I recently attended opening night to “House of Gucci” on Nov 24, and I don’t believe Leonardo da Vinci could paint the images left in my mind. Although time travel hasn’t been invented yet, Ridley Scott, director, seems to have accidentally stumbled pretty close.

Starring Lady Gaga, Adam Driver, Jared Leto, and Al Pacino, this movie gives us a glimpse into the real-life tragic love story between Patrizia Reggiani and Maurizio Gucci. As an addition to the ominous romance, we were also provided with many untold stories of the entire Gucci family, plus what were genuinely interesting facts about the Gucci brand itself.

While the brand has become an increasingly popular source of streetwear style accessories, many customers still have never learned the sinister backstory behind the family.

Investigating the film alongside me was Wesley Besikof, junior.

“Adam Driver and Lady Gaga both gave amazing performances,” Besikof said. “They handled the dark topic with a sense of dry humor that really elevated the whole film.”

For the entire duration of the movie I found my eyes were completely locked on the screen, unable to pull away. I recall feeling terrified, uneasy, comfortable, and satisfied all within a very short amount of time. “House of Gucci” acts as a true time machine as it effortlessly pulls the viewer back to the past to witness the slow breakdown of Reggiani, portrayed by Gaga.

With an average 4.2 star rating and 83% audience score, this movie is on track to be one of the highest grossing films of the 2021 holiday box office season. Quotes from the movie, specifically voiced by Gaga, have quickly become extremely popular over social media which helped boost awareness of the film.

Even though the movie has been receiving consistently good ratings as well as extremely positive reviews from fans, the real Gucci family wasn’t all too happy with the actors portrayal of themselves.

Former company chairman, Aldo Gucci, played by Pacino, felt the family was represented in the movie as “Thugs, ignorant and insensitive to the world around them.” The Gucci family described the movie as, “extremely painful from a human point of view and an insult to the legacy on which the brand is built today.”

The family also stated in an NBC interview that they were actually offended by Gaga’s take on Reggiani, saying that she “is portrayed not just in the film, but also in statements from cast members, as a victim trying to survive in a male and male chauvinist corporate culture.”

Despite the negative feelings from the family, fans of the brand and movies have raved over the very successful movie, and I completely agree.