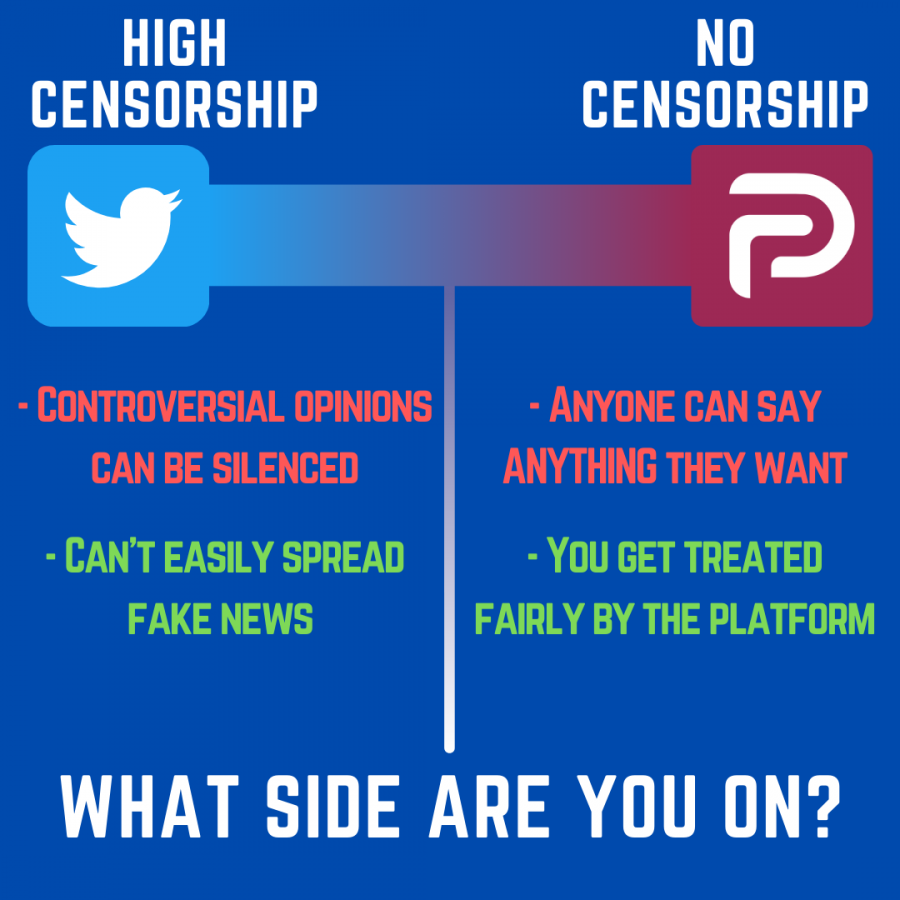 Social media censorship. A term circulated in our society that many do not understand the true extent of.

In the past few months, the prevalence of social media censorship has come to the forefront of political discussions, with debates centered around the ethics and effects of censorship. Twitter and Facebook have censored many users, sometimes unfairly, causing them to move to an app named Parler because of its lack of censorship.

Before we talk about the apps, what is social media censorship?

Social media censorship is the action a social media platform takes to silence a certain opinion or agenda.

Whether this opinion is too controversial, untruthful, or simply fits a narrative that the owners of the platform don’t want, the idea behind it is to promote one belief over another based on nothing but the desires of the company that owns the platform.

In the past, apps such as Social Club grew in their bubbles because of their low speech-regulation initiatives, but this app and many others akin to it had their bubbles popped because they couldn’t sustain their users. This changed in November when Parler, the new no-censorship bubble, appeared.

“The app doesn’t have many great features,” said Destin Biwott, sophomore. “One feature that I can appreciate is that there are no false flags on people’s posts like the way it is on Twitter and Facebook.”

While I initially thought having no censorship is inherently good, it occurred to me that it meant anyone, from the average fake-news creator to the neo-nazi, can say whatever they want with no pushback.

“Twitter is doing the right job because they are only censoring false information which many conservatives tweets contain,” said Maya Bozecivich, sophomore.

While I do believe in the idea of Parler – a complete free-speech zone, the actual reality that this idea brings forth is always the same: misinformation, heavily racist, sexist, and homophobic speech are all allowed to fester and start to influence more people, thereby increasing the prevalence of this nefarious speech.

I have personally seen users on Parler commenting things that they can say nowhere else on the internet. I have also been able to post something so false that looks like it came out of a Mad-Lib and get thousands of views on the post along with ten new followers because of it.

This all stems from the idea that is growing on both sides of the political spectrum: that every opinion or belief needs to be validated. We see the ratings on Fox News plummeting as channels such as OAN and Newsmax take their viewers that only watch them to validate their own beliefs, factual or not. We see people stringing innocuous situations into a web of “real” racism, sexism, and homophobia and canceling people because of it.

This is why Parler’s bubble may not pop like past companies. If it moves towards censoring left-wing voices, the validation that its users crave will be handed to them, and they will return the favor by using the app.