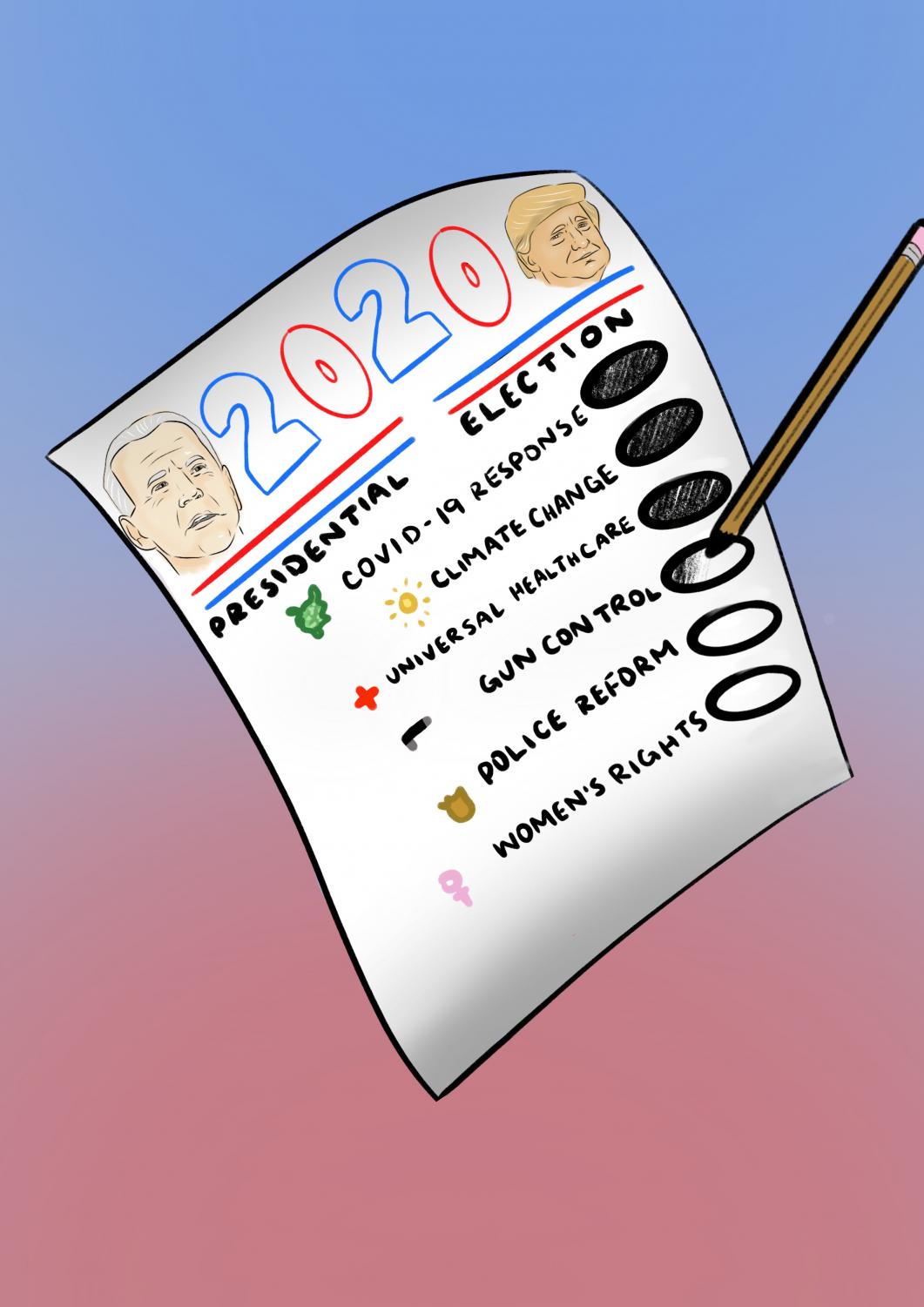 With what feels like an apocalypse, who will the people vote to lead us through this historic time?

On Wednesday, Nov. 9 Ms. Allegra Smisek, Assistant Director, told herself she would keep her composure and maintain a sense of normalcy for her first block Global Studies class. But, as she walked through the door, she was crying. 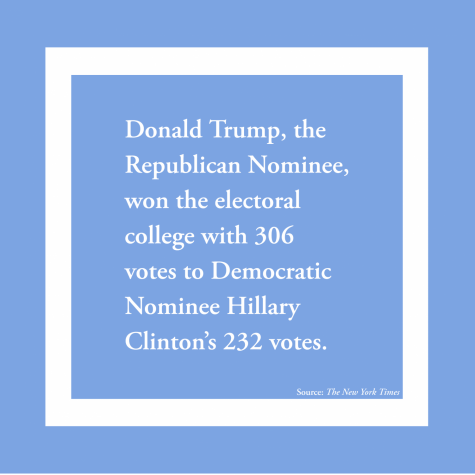 Her distress was shared by millions of peoples throughout the country and the results were shocking for both parties. Donald Trump, the 2016 Republican Nominee, won the electoral college with 306 votes to Democratic Nominee Hillary Clinton’s 232 votes.

“You get to know students in the class, but that day it felt like everyone got so connected. Everybody took off their masks and were their true selves in that moment,” Ms. Smisek said. “Everyone was feeling something really intensely. I always wanted kids to care about civics and global studies, but it made me realize all the other things that impact kids’ lives in eighth grade.”

This intensity was present in HHS, too. In the mall, students huddled together crying in disbelief.

“Traditionally, young people aren’t as engaged in elections, partially because they don’t feel like it impacts them. But that day in our class, and everywhere, young people realized how big of an impact elections can have on their lives,” Ms. Smisek said. “I saw a Times magazine with the kids of Parkland, and it said ‘We can vote now, we’re old enough to vote.’ Right after, there was the women’s march. Then you had the March For Our Lives.”

Students, often too young to vote, have led hundreds of movements across the nation and in the halls of HHS. 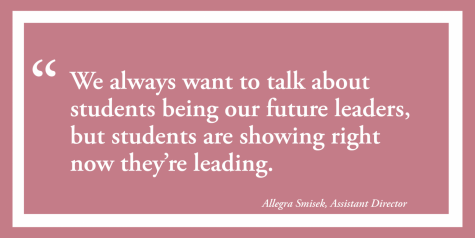 “We always want to talk about students being our future leaders, but students are showing right now they’re leading,” Ms. Smisek said.

Within the Hopkins School District, there have been changes enacted too. The school board recently voted to remove School Resource Officers, and HHS has organized racial affinity groups to engage students.

“The momentum among students has been growing, so I feel like the timing was really good with Principal Ballard. Students at Hopkins have been demanding more conversations about race, demanding change in what we learn and how we learn,” Ms. Smisek said.

Looking ahead to the 2020 election and beyond, young voters and students have power. According to CIRCLE, there are 10 million young people ages 18-29 who have cast their absentee ballots already.

In 2016, Trump won Wisconsin by only 26,257 votes. In one of the most critical battleground states this year, Pennsylvania, Trump won by 82,236 votes. Young voters easily could have made the difference between these states’ electoral votes going to Clinton instead of Trump.

As these students become adults, and with an increasing number of young voters, their progressive perspectives will become the moderate norm.

“It wasn’t that many years ago now, but it was revolutionary, that Minnesota passed the gay marriage law,” Ms. Smisek said. “People couldn’t believe it. It got so nasty, and it wasn’t a sure thing that it would pass. Right? So things can shift really quickly which is great,”

Additionally, the liberal views held by younger voices can be passed to older citizens who traditionally uphold conservative ideals.

“Frankly, I find that young people have much more progressive views about race, gender, climate, and so many things,” Ms. Smisek said.  “They can provide leadership for older people who take a little bit longer to get it.”

Although Ms. Smisek recently obtained her admin license, she still feels the impact students had on her as a teacher.

“That experience from the election with our class really motivated me to run for state representative. I told the story of that day and how powerful that moment was,” Ms. Smisek said. “Because of that speech, people reached out to me to run for the Richfield school board a year later.”

There’s no doubt the 2020 presidential election will have a similar effect on students as the previous one, but in the following decades Hopkins students will discover the impact they have locally, state-wide, and throughout the nation.

“I’m really grateful I work in Hopkins, and that I got to be their teacher. That day was so hard, but you all changed my life. In a very specific and profound way, and I’m just really grateful for that,” Ms. Smisek said.

With the presidential election coming up, there is a whole new generation of first-time voters.

It’s obvious that the 2020 election has become prominently more important for both political parties, this is due to a lot of different causes. From the reignition of the fire that is racial injustice and inequality to a deadly pandemic, that has killed close to 220 thousand people in the US alone.

With what feels like an apocalypse, who will the people of the US vote to lead us through this historic time and come out better on the other side?

But it’s not just adults who have to live in this world, young people, like high schoolers, have to still live through and have no true counted vote because they aren’t old enough.

Now, this has been a problem ever since you had to be 18 to vote in elections, but it is more prominent now due to this very vital election, and that goes for both major parties.

In such a controversial and significant election, this has a lot of young people disheartened that they can’t vote and have their opinion counted.

Yet just because they can’t vote doesn’t mean they can’t be a part of democracy and exercising their political rights. 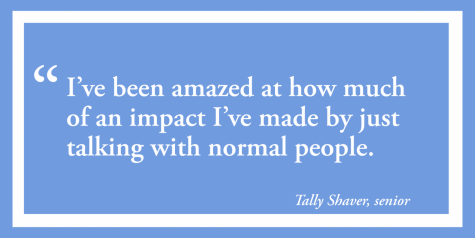 Tally Shaver, the senior, worked over the summer and into the year with a local representative campaign, Kelly Morrison.

“I was looking for something to do over the summer, I hadn’t been super into local politics but I’ve been working with Kelly Morrison’s intern team since May,” Shaver said.

“I’ve been amazed at how much of an impact I’ve made by just talking with normal people,” Shaver said. “Because no matter who the president is, they can’t represent every single person. But your state representative, or any local official, can care about more of an individual population.”

Even if you don’t want to back a specific candidate, teenagers can work at a polling place as an election judge.

It’s not just students being independent and taking action, but schools as well. 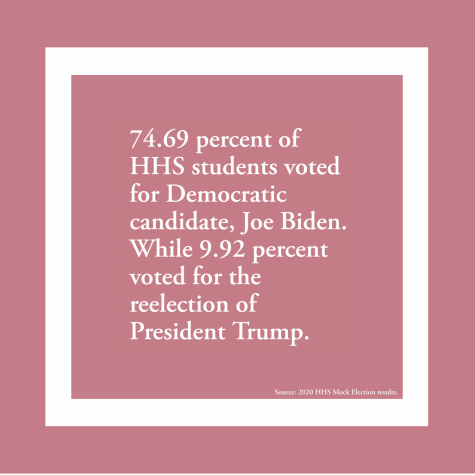 On Wednesday, Oct. 28, HHS held a mock election. It was presented as a google form with all of the presidential candidates that would be on the ballot this election.

“74.69 percent of HHS students voted for Democratic candidate, Joe Biden. While 9.92 percent voted for the reelection of President Trump. The highest of the other candidates was Kanye West with 9.70 percent,” according to the 2020 HHS Mock Election results.

It’s especially important for schools to collect this data because it helps the staff and students see the political diversity within the school.

It is amazing that schools do this because education in the importance of politics is critical.

The education of politics is extremely important, and that goes for wherever you stand. Whether you are liberal, conservative, independent, or have no idea where you stand, the choice and act of exercising your political right, we seem to forget is an extreme privilege.

As much as the US and our political system are not perfect, we are extremely lucky to have democracy as our form of government. We should be grateful we get the right to choose who leads us. We are privileged to not live under a monarchy or dictatorship like in some parts of the world.

No candidate will be able to satisfy everyone, that’s obvious. But choosing someone who you believe can lead the people of the US is a great gift that we have.

With generation Z being so politically active, it only proves that when they are able to vote, that their choices will be sure they are choosing for the better of everyone.