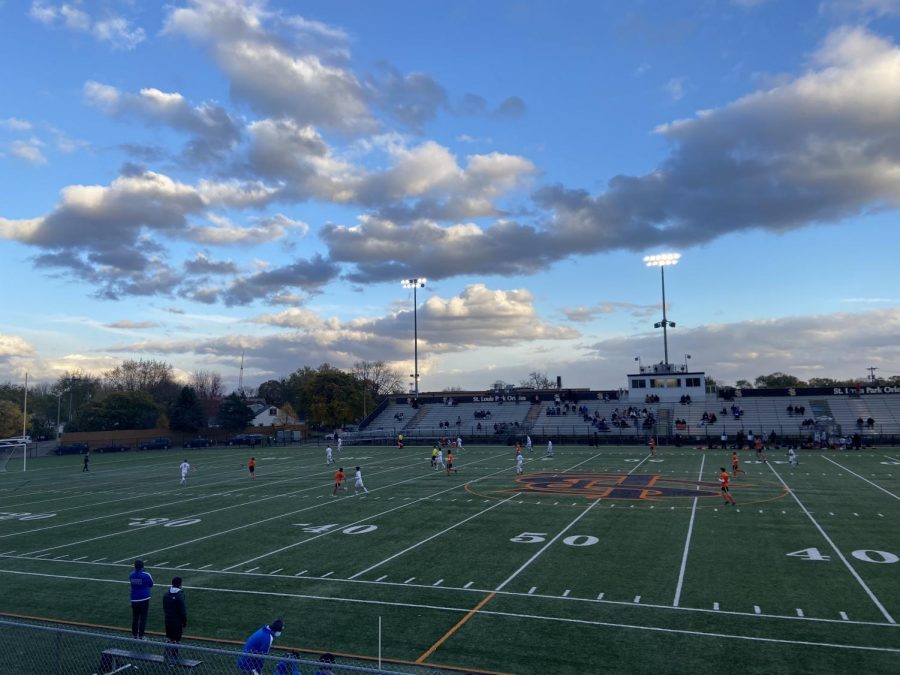 The game tonight at the Oriole Stadium against Saint Louis Park [SLP] concluded the final game of the Hopkins season and led to Hopkins elimination from sections.

Within the first half, SLP was able to score two back-to-back goals. Hopkins had difficulty on offense before halftime but kept up defense despite the 2-0 scoreboard.

Monroe Chumklang, senior, was a standout player for Hopkins on defense. On the other side of the pitch, there were several attempts to break through SLP’s defense, but it was no use as SLP was able to stay strong and continued to pressure Hopkins.

After the half, the players and fans felt the cold October breeze and 57°F weather. The fans were able to stay warm, bundling in jackets and wearing mandated masks due to coronavirus.

The whistle blew and the second half commenced. Hopkins stayed on offense for the better part of the half and had two opportunities for scoring with 31 minutes and 27 minutes left in the game. Both of which were saved by SLP’s goalkeeper.

There was one close opportunity with 18 minutes left in the second half, the crowd cheering for the kick, but this was followed by a wave of sighs as fans sat back down on the bleachers.

Ismael Castro-montoya, senior, had an impressive and well-placed cross pass with 10 minutes left in the game. Hopkins wasn’t able to follow through on this and SLP turned it around to score their third goal to make the score 3-0.

Coleman Chin, junior, played critical defense and tried to keep SLP from scoring again in the second half, but despite their best efforts the final score was 4-0.

This marks the end of Hopkins boys’ soccer season and the last game seniors will play in their high school career.

“All of us were pretty quiet on the bus. We’re proud of ourselves, but it hasn’t hit me yet that we just played our last game,” said Raines Lucas, senior.

Although this was their last game, Lucas believes Hopkins boys soccer will continue to thrive in the future.

“We have a really young team. We’ve had young guys stepping it up since captains’ practices this summer,” Lucas said. “I think the future of this team is very promising.”