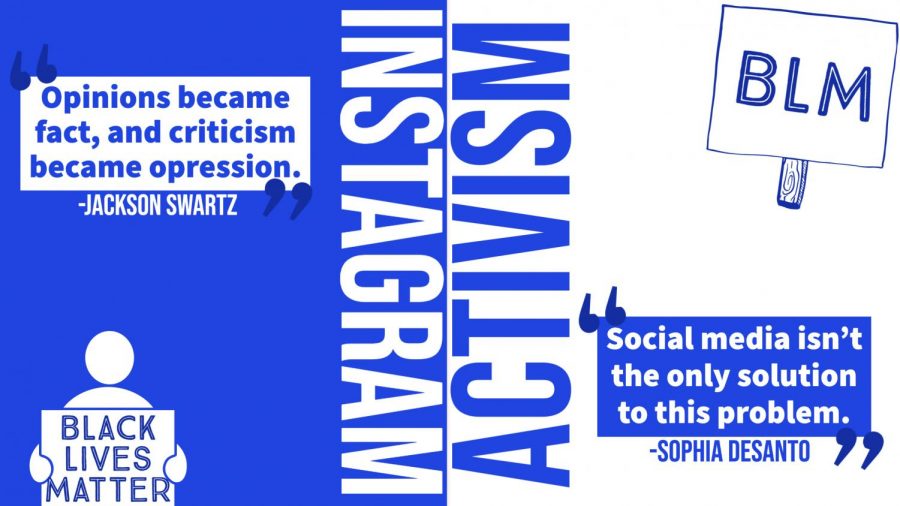 Are Social Media Accounts an Effective Form of Activism?

While witnessing this, I asked myself, is this fighting racism?  Yes, it is very obviously bringing awareness to the cause.”

After George Floyd’s death in May, protests sparked all across the world. Along with protests, social media posts regarding police violence and advocacy for black lives spread all over Instagram.

While witnessing this, I asked myself, is this fighting racism?

Yes, it is very obviously bringing awareness to the cause, and the Black Lives Matter movement has gained many supporters. Still, I continued to wonder whether or not this was bringing about systemic change as well as social change.

I’ve noticed, there are two different types of racism; systemic racism and social racism. Both of which are equally unacceptable.

Systemic racism, which includes gerrymandering, voter suppression of people of color (POC), and incarceration rate gaps is defined by Derrick Johnson, National Association of the Advancement of Colored People (NAACP) president as, “systems and structures that have procedures or processes that disadvantage African Americans.”

Racial and ethnic disparities are a continuous problem in American prisons. According to the United States Department of Justice, African Americans are incarcerated at a rate of 5.1 times higher than the imprisonment of whites.

If you believe that racism isn’t a problem in the U.S just because you don’t see it every day, you are wrong. Racism runs deep in American values, traditions, and systems. This country was built off of stolen land from indigenous peoples and the enslavement of African Americans.

Signing petitions have become a popular way of showing support for the Black Lives Matter movement and a way to make a change. The petition on Change.org titled “Justice for Breonna Taylor” has 11 million signatures and counting. The petition was started by Lorelai HoJay, who appears to be an arbitrary citizen dedicated to getting justice for Taylor.

So, is a petition effective if anyone can start one?

At the surface, not really. Technically it is not addressing a politician or being sent to the House, for example. While there is no question it can gain public attention, real legislative changes doesn’t come from Change.org.

Yet, I still sign these petitions. How could I not believe in arresting the officers that shot Stephon Clark 20 times in the back for allegedly holding a gun in his hand, when the gun was actually a mobile phone.

Social racism runs just as deep as systemic racism but in a different direction. This includes when non-African Americans use the N-word, microaggressions such as assuming a POC is a criminal, and similar acts of racism in a more social setting.

As a white woman, I have become more aware of the racism my peers at HHS face, both social and systemic. Through Instagram accounts such as @blackathhs, I have heard the countless stories of systemic and social racism running through my school.

These stories are told by alumni as old as the class of 2013, proving that racism has been a problem at HHS for many years, no matter how diverse we are.

HHS administration has yet to publicly respond, although actions were taken to further educate scholars, such as the racial affinity groups or the implicit bias quiz taken during advisory.

So, is social media aiding in the fight against racism? In a way, yes it is. If people had never seen Instagram posts about the many black lives that had been failed by our corrupt system, protests against our system wouldn’t still be happening.

But, social media isn’t the only solution to this problem. Systemic change starts with fixing the system. Electing officials who will do this is the key.

No, social media isn’t an effective form of activism.

The world for better or worse, was changing everyday. Different people had their different reactions. Some took to the streets and protested, a few rioted, some simply delighted in the chaos, others…posted on instagram.”

In an age where pitchforks and torches have taken on the shape of likes and clicks, the tree of normalcy is being shaken like never before.

People are upset and rightfully so. The once steady tide seen as reality turned to a roaring wave, nudging a reluctant society onto a turbulent fourth act.

The occasional BLM [Black Lives Matter] headline morphed into a fire students could witness from their own doors, windows and vehicles. Coronavirus forced us all to finally look in the mirror, and like an insecure man on a bad acid trip, we didn’t like what we saw.

Circumstances landed us at home, bored. The technological wheels of a television or cell phone constantly in turn. Cubicle workers began thinking, “Wait, this could be done from home all along?” Kids our age suddenly found themselves with more free time than ever before, nothing to spend it on but Tiger King and Outer Banks.

The economy collapsed, leaving many a family in disarray. Above all, conversations of race, equality and the criminal justice system began to once again take the forefront of political discourse.

Naturally, our country found itself more than gripped by the hands of uncertainty, when revolution finally decided to kick in the door. The world, for better or worse, was changing every day. Different people had their different reactions. Some took to the streets and protested, a few rioted, some simply delighted in the chaos, others…posted on Instagram.

Ashley, Max, and Jessica all wanted you to know their views on healthcare and social security. That kid who used to say the N-word started preaching about how wrong it is to say it. Like every day.

What was once a simple way to connect with others morphed into a court of rumors, an echo chamber of deceit, where we, the viewer, are expected to play juror to what’s fact or fiction. Opinions became fact, and criticism became oppression.

I simply can’t keep sorting through a million threads on how using the word “dude” is classist. Only to find myself reading how President Trump is a racist because he sat next to a homophobic priest at a gala event one summer night on Aug. 26, 2005.

We’ve begun behaving less like a nation trying to sort itself out and more like children sharing their political compass results in the back of an Advanced Placement Government class. More concerned with arbitrary side picking then any actual change, we’ve tarnished the very fabric we sought to uphold.

I’m not the only one who feels this way. Plenty of students now find themselves in a political limbo, debating whether to post or not post. Is their silence showing complacency? Perhaps they better retweet that infographic, or caption their bikini pictures with kind words on Breonna Taylor.

Daniel Clarke, senior, has his own perspective.

“By putting the post on your story you’re virtue signaling. Those who agree with you already believe whatever you’re posting, and those who don’t agree won’t take the time to read them.” Clarke said.

For the first time in human history, the path to change lies right in our front pockets, yet what have we done with it besides give each other pats on the back? Activism has turned into something you can do with a bag of Cheetos in hand and your phone in the other. Hundreds of years of oppression have boiled down to Instagram captions, lighting democracy on fire like never before.

I’ll be the first to say I could be doing more, I just don’t think the answer lies in a black square, a hashtag or a cute infographic.

So if you disagree with this article, don’t worry, I’m sure there’s a petition you can sign.