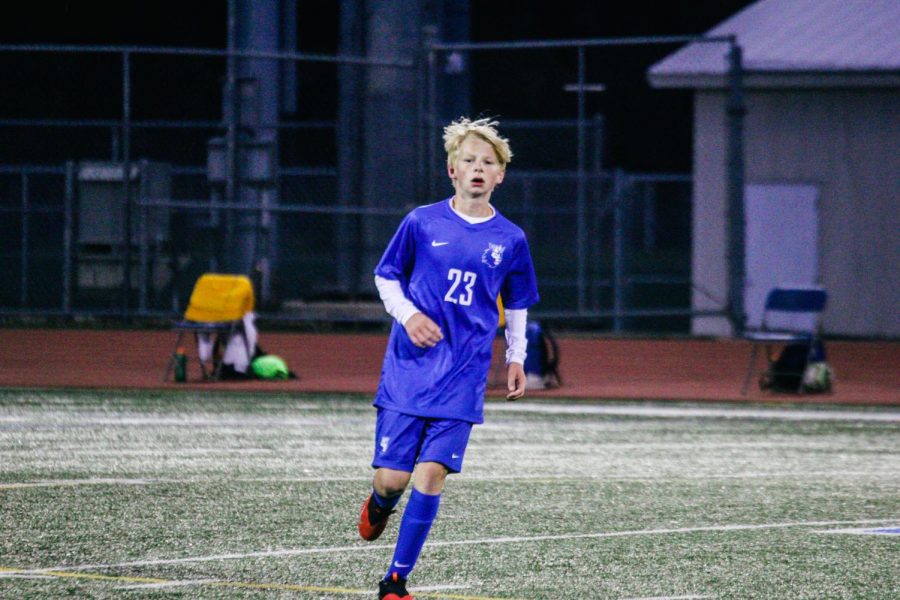 After a Cinderella run in the section tournament last season, the HHS boys soccer team was looking forward to a new year, and similar success.

On Aug. 4, the Minnesota State High School League [MSHSL] announced that boys and girls soccer would be played this fall, regardless of Covid-19. Once the players and referees are on the field, it is soccer as normal. However, off the field, many changes have been instituted.

“At games the sideline is spread out so that every person not playing is six feet apart,” said Will Hess, senior. “We also have to wear masks until we get into the stadium to warm up.”

Players are also required to wear masks when entering and leaving practices, and coaches have to wear a mask at all times. All participants have to complete daily health checks before they can play, to ensure that no one has any symptoms of Covid-19.

“This season has been different in many ways. We can’t huddle before games, we don’t get to sit on the bench close to each other, and we have to bring our own water,” said Jonas Swan, senior.

The season was shortened as a way to limit contact, as a normal season would be made up of 17 games with 12 games against conference opponents, and five against non-conference teams.

This year the boys will only play 11 games. They play Edina, Wayzata, Minnetonka, Buffalo, and St. Michael twice, and Eden Prairie once.

Even though the players were excited about not losing their season, some were surprised by the MSHSL’s decision.

“I thought it was a little strange they gave us a season, just because soccer is a pretty high contact sport,” said Peter Eklund, junior. “It’s really nice to get a break from school and be able to get outside and play.”

“I had high hopes of having a season this year, but I really thought we wouldn’t,” said Hess.

Although the season looks very different from previous years, the players are not concerned with the strangeness, but are focused on the team and winning soccer games.

“The big thing that changed this year was our roster. We lost 13 seniors at the end of last season, which was more than half the team,” said Eklund.

The team started off the season with an impressive 1-0 win over St. Michael. Raines Lucas, senior, scored a late goal in the second half to give Hopkins the lead.

Hopkins then traveled to play Minnetonka, where they suffered a tough loss at the hands of the first place Skippers. They bounced back with a 2-0 win over Buffalo, and the team started the season with two wins and one loss.

“Starting off 2-1 felt good. We were playing well and bonding as a team, but I knew this team was loaded with talent and potential,” Swan said. “I think going 2-1 to start the season opened some other teams eyes that this isn’t the past Hopkins, rather a new Hopkins that is hungry for wins.”

In their next four games they suffered losses to Wayzata and Edina, played a hard game against Eden Prairie that resulted in a tie, and beat Buffalo 2-0 in the second matchup between the teams.

“This is the best regular season we have had in the last four years, and I think our goals have definitely shifted from the beginning of the year. I think our new goal is to shoot for top 3 in the conference,” said Eklund.

At the beginning of the season it was unknown if a section tournament would be played, but on Sept. 21, the MSHSL made the decision to extend the season and reward the teams with the postseason.

“I expect big things in sections this year. We were very dominant on the field, and I expect that to happen in sections as well,” said Swan.