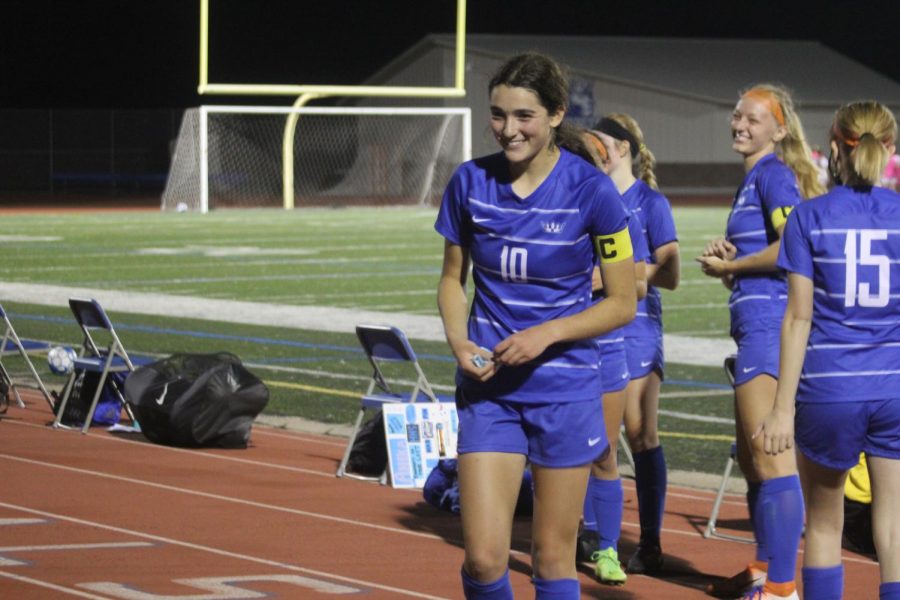 Josie Fieldman, senior, runs up to greet her parents during the halftime ceremony honoring seniors.

HHS girls soccer seniors played their last regular-season game in the stadium on Thursday, Sept. 24 in a close battle with their rivals, the Minnetonka Skippers.

The Skippers defeated the Royals 1-0, with the one goal coming from a penalty kick off the foot of Skippers midfielder Lissa Mizutani in the second half. In the last matchup against the Skippers, the Royals lost 5-1.

Ellie Holicky, senior, saw firsthand the improvement from the last game against Minnetonka.

“We changed our attitude going into the game and the players and team as a whole had a lot more confidence,” Holicky said. “With it being senior night and under the lights, it felt very different from the last time around.”

The team is going to have a different look next year, as eight players are graduating. Holicky, along with Josie Fieldman, Amelia Carrizales, Ellise Wright, Katherine Ekman, Anika Firehammer, Meghan O’Reilly, and Ava Kampf will all be moving on, with Fieldman committed to play soccer at North Dakota State University.

Though big shoes to fill, Holicky has confidence in the younger players’ abilities to step up next year to fill in the void.

“The younger girls will do great because not only are they talented on the varsity and junior varsity level, but they are also very strong ladies,” Holicky said. “I’m definitely going to miss being on the same team as them, but I know they will do great things in the future.”

Holicky’s most important piece of advice: don’t dwell on the past.

“No matter what happens, keep pushing yourself and keep your head up. Everyone makes mistakes, but don’t dwell on them. Instead, use them to fuel your growth as a player,” Holicky said.