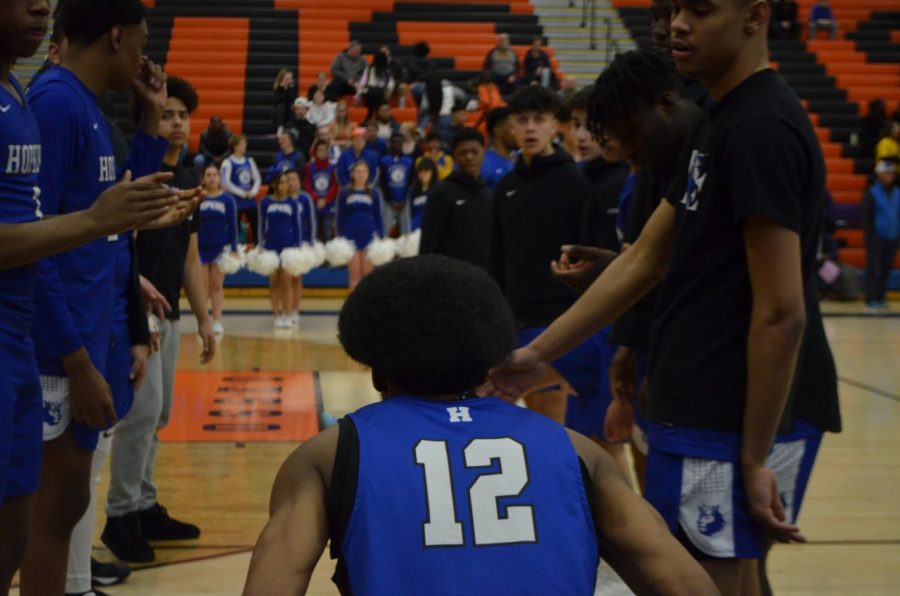 Kerwin Walton, senior, prepares to hear his name announced before the Mar. 6 section semifinal against Wayzata. Walton announced his commitment to the University of North Carolina on the morning of Apr. 27.

Just days before the May 1 National Commitment Day, Hopkins senior swingman Kerwin Walton made his much anticipated decision to commit to playing basketball with the University of North Carolina in a video call with 247 Sports Director of Recruiting Evan Daniels earlier today.

Walton, a focal point in this year’s Hopkins team which qualified for the Class 4A state tournament for the second year in a row, chose the Tar Heels on Apr. 27 after narrowing his choices down to a top six which included the hometown Minnesota Gophers, the Arizona Wildcats, where his former Royals teammate Zeke Nnaji played for one season, along with the Georgetown Hoyas, Creighton Bluejays and Vanderbilt Commodores.

During the call with Daniels, Walton gave out some of the reasons as to why he would be joining Roy Williams and the six- time NCAA Tournament champions in Chapel Hill, NC.

“I just had a really good relationship with the coaches. The atmosphere was really great there and the fans show a lot of love. I thought it was the biggest stage in college and I think that’s a good place for me to learn and grow,” said Walton on the call.

A three-year starter with head coach Ken Novak Jr.’s Royals, Walton has blossomed into one of the most lethal perimeter scoring threats in the nation, pouring in 26.4 points per game in his senior campaign en route to being named to the 2019-20 Star Tribune All-Metro Team. His prowess has led him skyrocketing up the recruitment rankings over the last year, cracking 247 Sports’ Top 100 as the No. 99 recruit in the country and the No. 5 recruit in Minnesota.

Walton is the latest addition to a stacked UNC recruiting class, which is ranked third in the nation by ESPN and 247 Sports. He will be joined alongside three five-star recruits with a dangerous frontcourt duo of Day’Ron Sharpe and Walker Kessler along with point guard Caleb Love.

Despite the loaded class, Tar Heels head coach Roy Williams has made Walton and his recruitment a priority and hopes to work him into the fold for a potential NCAA championship squad.