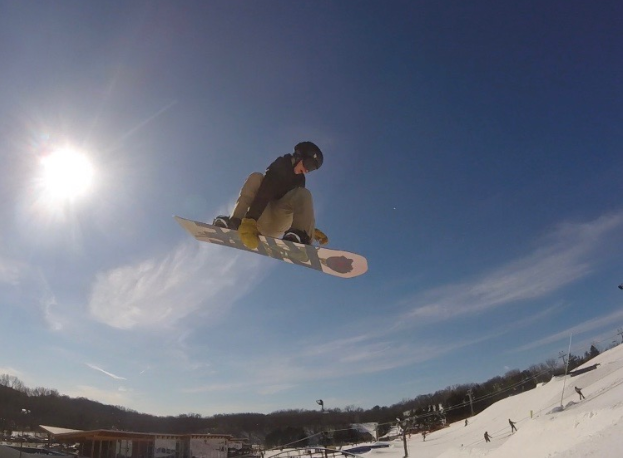 Sam Goldman, sophomore, completes a course at Hyland Hills. Goldman has been snowboarding for most of his life.

Students may know Sam Goldman, sophomore, as a student, but not as an athlete.

Ranked 38th in the nation for slopestyle discipline, Goldman competes through USASA (United States Snowboard Association). They hold competitions throughout the winter around the Minnesota hills then at Copper Mountain, Colorado for nationals.

Goldman goes to Hyland Hills everyday where he rides with a program called G-team,a snowboard team in minnesota. Though it may seem like training, to him he is just riding around with his friends.

While Goldman competes alone he always has his friends to cheer him on even though he can count on himself to come through.

Snowboarding, according to Goldman, is like an artform, but competing in snowboarding is a love-hate relationship to Goldman. It takes away creativity, but it fuels you like selling your painting at the auction house.

“Slopestyle really impacts the creativity of snowboarding because it forces you to hit every single feature and do as many spins and grabs as you can to get the most points,” Goldman said.

Goldman’s next competition is not until after spring break at nationals, located at Copper Mountain. He will be competing with the best from all around the nation.