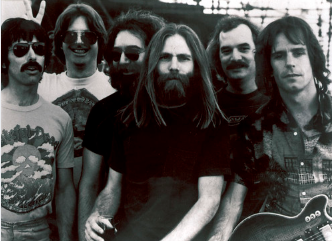 Grateful Dead’s bassist, Phil Lesh, doesn’t step up to the mike very often due to his deadpan vocals, but when he finally works up the courage, the listener is in for a real treat. This song shows Lesh’s songwriting at its prime.

Spiritual lyrics swirl around an instrumental river, a stretched out guitar solo follows down a road unknown. Yet for as much as the chaos threatens to enshroud the listener, the vibe is peacefully serene. A diamond in the rough of the Dead’s expansive discography.

The recommended listening experience would be somewhere on a country road, the sun shining in through a cloak of clouds, windows down. But if that doesn’t work for you, simply plug in your Airpods

“The Night” by The Moody Blues

The Moody Blues make classic music with a rock ‘n’ roll soul, and this song is no exception. Justin Hayward’s piercing vocals soar over flutes, xylophones, and nearly any musical instrument one could muster, to create a listening experience that’s truly its own world, a planet discovered beneath the cosmos.

It’s the atmosphere of desolate street corners, of a city alone on a Friday night, of reflection and contemplation.

The recommended listening experience would be a rainy night, preferably New York City, on a walk. If that’s not in the cards for you, play this song on your next night ride home, you just might be surprised at what you find.

“I’ll Be Your Mirror” by The Velvet Underground & Nico

Art rock has come a long way since the Velvet Underground’s formation, but this 1967 classic still rings true as one of the best written songs of all time. Band leader Lou Reed’s plays a sizzling melody on guitar, with Nico singing with the candour of a forgotten ghost, culminating in a haunting listen. Yet this is in the best of ways, like a good horror movie, reeling the listener back in for more.

If the music itself hasn’t won you over, the lyrics will. Focusing on them alone, the song itself is lost, replaced by a beautiful peace of avant-garde poetry. It’s a nursery rhyme for adults, the fizzling of a literary brain musing on the puzzle pieces of life, it’s Lou Reed at his best.

The recommended listening experience would be getting ready for some elite gala. Perhaps a fundraiser of some sorts. You’re tightening your tie, zipping up your gown, yet not entirely sure if everythings in its right place.

“Samson and Delilah” by Grateful Dead

Most people are probably familiar with the story of Samson and Delilah. Whether you heard it through your Hebrew school teacher, your parents, or the bible itself, you haven’t heard it like this.

Like dusting off pages of an old book, the Grateful Dead bring the biblical story alive, Weir’s vocals soaring up like a skyscraper. It’s a rock ‘n’ roll song for the whole family, a wholesome story that doesn’t detract from the edge of the music.

The recommended listening experience would be sitting around the campfire on a carefree summer night, your only worry being roasting a perfectly gold marshmallow.

“Love Minus Zero / No Limit” by Bob Dylan

Bob Dylan is plenty of things: a rockstar, folk troubadour, carnie vagabond, and born again Christian. But one thing people seem to let slip is romantic. Favoring his more politically charged music, some of the world’s greatest love songs were often swept under the rug by a largely ungrateful audience.

This track, off Dylan’s 1965 album “Bringing It All Back Home,” is no exception. A heartfelt love song written by one of the greatest poets the world has ever seen.

Dylan’s imagery here is so bright, so livid and tinged with imagination, it paints a picture entirely its own. Some things aren’t supposed to be there, hurting one’s brain to even conjur, like a Salvador Dali painting through words alone.

Yet even past the ever present imagery is the song itself, a piece that could come to define the world “ballad.”

The recommended listening experience would be a fall morning, preferably brisk and cold. Sitting on a porch with a cup of coffee, overlooking an autumn-tinged woods.