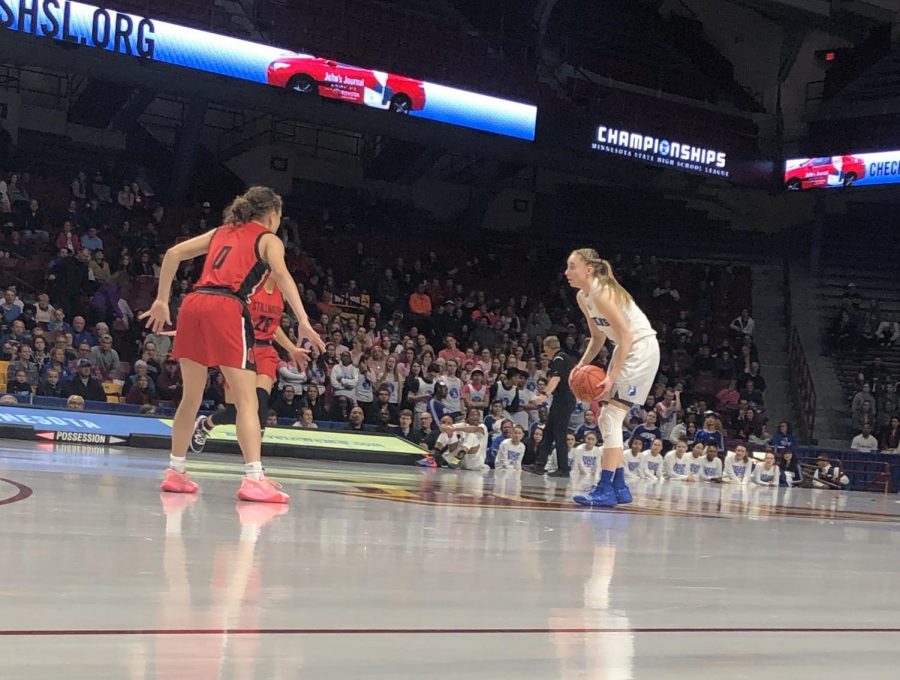 Paige Bueckers, senior, sizes up two Ponies defenders in the first half of the Royals 66-40 state semifinals victory over Stillwater. Bueckers finished the game with 15 points, 10 rebounds and seven assists

In a 24-hour period in which coronavirus uncertainty reigned supreme with all three major sports leagues in North America being suspended indefinitely, sports, as it has done so many times before, provided a distraction to the whirlwind of events the world is experiencing, as Hopkins fans rejoiced in a 66-40 triumph which brought the Royals one game closer to repeating as state champions.

The Royals (30-0) were slated to face the Ponies (24-5) in a regular season rematch of the 2019 state championship game on Jan. 18, but fate intervened in the form of inclement weather and the game was never made up. With this in mind, Stillwater has been waiting 361 days to exact vengeance for the demoralizing blowout in last season’s final, where they entered halftime with the lead only to lose by 29 points.

On Thursday, the Royals did not take long to continue the pummeling that they started in the second half of their previous matchup.

Stillwater did not look like the team that defeated the Park Center Pirates 82-52 in quarterfinal action during the first quarter of Thursday night’s clash. Ponies junior guard Alexis Pratt gave the ball up nine times in the first half in a lackluster display of ball security that featured 20 first turnovers in the opening 18 minutes of play. When they did manage to hold onto the ball, the shooting performance followed suit in an abysmal 2-14 from the field 11 minutes into the game including a few missed transition opportunities

Hopkins pounced on their opponents mistakes and seized control of the game within a matter of minutes. Steered by the trademark teamwork that has taken the Royals to the upper echelons of girls high school basketball, Hopkins embarked on a 23-4 run that spanned 10 minutes of the first half.

Senior guard Paige Bueckers was relentless on defense and forced turnovers both in the Ponies half-court sets and in full-court press scenarios. Four other Royals picked a Pony pocket during the impressive first half lockdown.

Things got interesting to finish out the half however, as Stillwater started to find their groove after the sluggish start. Pratt and senior forward Liza Karlen contributed all but two of Stillwater with 10 and 11 points, respectively, while Karlen sealed a double-double with 10 rebounds to her name. The Section 4AAAA champs outscored the defending state champs 19-10 after the initial run to commence the game to bring the halftime score to 33-23.

A comeback effort could not be completed in the second half by the Ponies despite the momentum they built going into the half.

The Ponies defense could not stop the red hot Royals offense and the second half scoring margin was even wider than it was in the first, as Hopkins outscored their counterparts 33-17. No matter what defensive technique was applied, Stillwater could not find an answer with the Royals finding their third different leading scorer in three games with freshman forward Taylor Woodson leading the pack on her 21-point effort. Woodson’s and-one inside with 3:16 remaining put Hopkins up by 20, effectively clinching their sixth straight state championship game appearance.

Royals head coach Brian Cosgriff credited a two-hour post-game shooting session after the team’s quarterfinal win against Cambridge-Isanti with an offensive turnaround with only eight points.

After the game, everyone’s attention turned back to the storm cloud which loomed in the distance with how Saturday’s game would proceed with the coronavirus outbreak. Earlier on Thursday, the Minnesota State High School League issued a statement stating that attendance for the state final would be greatly limited.

Cosgriff acknowledged the bizarre situation that Saturday presents with a complete juxtaposition of crowd attendance from a raucous contingent of Lindbergh Loonies and other members of the Hopkins community one year ago as compared to a nearly empty venue two days from now.

“It’s gonna feel like a glorified scrimmage without any of the fans there, but I’m still grateful that they’re still putting it on,” said Cosgriff during a post-game press conference.

Bueckers also said that even though the atmosphere of Williams Arena will be different in her fifth and final state title game, it will not deter the Royals in their journey to another state championship trophy.

“It really doesn’t matter who’s there and who isn’t there. We all just play for each other,” said Bueckers.

While the future of how the school district is going to operate for the foreseeable future is up and the air and the domino effect of different sports being suspended and postponed seemingly every minute, there is one thing that is certain: Hopkins will be playing Farmington this Saturday with the biggest prize in Minnesota girls basketball on the line.