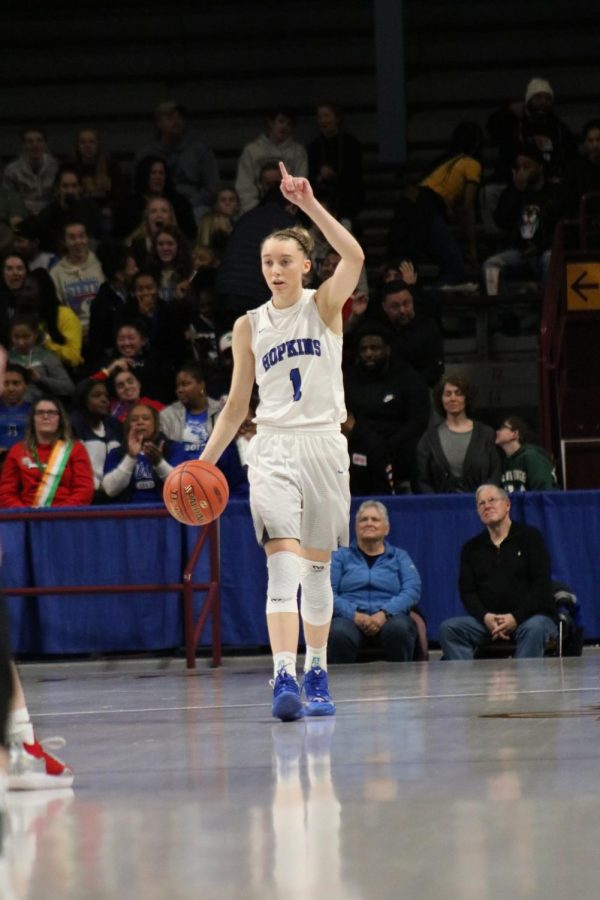 Paige Bueckers, alumni, walks up the court in the 2019 state championship game.

Paige Bueckers, senior and the No. 1 women’s basketball recruits of 2020, has won the Gatorade Player of the Year Award.

Minnesota Timberwolves star Karl-Anthony Towns was at HHS to present Bueckers with her award alongside her teammates, head coach Brian Cosgriff, athletic director Dan Johnson and staff, her parents and camera crews. Towns was the recipient of the Men’s Gatorade Player of the Year as a senior in high school in 2014.

The award was established in 1985 to recognize the nation’s top performing student athletes. The award stands on three pillars, consisting of athletics excellence, academic achievement and exemplary character.

The national announcement was a surprise to Bueckers, along with teammates, peers and teachers, until March 9.

Towns and camera crews will be in the building for two days to create an award video to celebrate Bueckers’ accomplishment. A video of Bueckers receiving her award will be published in the evening of Monday, March 9. A second video will be released on Wednesday, March 11, which will follow Bueckers throughout her day at HHS.

In addition to Towns bestowing the prestigious award to Bueckers, the basketball star attended the Hopkins girls section finals game against Wayzata last Thursday, where he sat front row with his Timberwolves teammates.

Hopkins has been the home to a handful of Gatorade State Player of the Year winners including 2001-2002 & 2002-2003 men’s basketball recipient Kris Humphries, 2014-2015 boys track & field winner Joe Klecker and 2014-2015 girls volleyball winner Samantha Seliger-Swenson, but Bueckers is the first Royal to accept the national award.