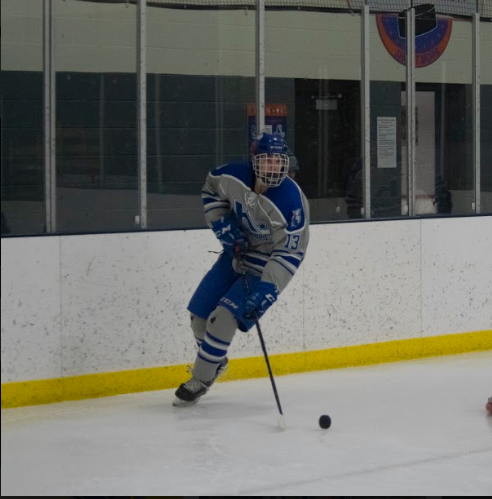 Dominic Valentini, junior skates around his net with the puck. Valentini has proven to be a offensive threat on the Hopkins boys varsity team.

Enter the chilly Hopkins Pavilion and you’ll find a workhorse in Dominic Valentini, junior, skating around on the rink. The season may be over for the boys hockey team but that doesn’t mean the work is.

Putting work in every day, on the ice or in the weight room, you’ll find Valentini there breaking a sweat or putting in the extra rep. However this work ethic didn’t start yesterday.

For Valentini it all started when he fell in love with the game of hockey at six years old, and has continued to play since.

“I have to credit my work ethic to my love and passion for the game of hockey,” Valentini said. He continues to strive to be the best player he can be for his teammates.

Valentini is a center for the Hopkins Royals, while also holding the title as captain. His play has been everything but inconsistent, playing in all 25 games this season Valentini is second in goals with nine and leads the team in assists with 21.

Priding himself on his ability to find the open man and set up his teammates with scoring chances is not a surprise. But personal accomplishments are not the goal for Valentini. “To me it doesn’t matter what my stats are if it doesn’t translate to a win,” Valentini said.

Hopkins held a 7-15 record heading into the first game of sections against #1 seeded Blake Bears. The season may not have gone exactly the way that Valentini or the rest of the boys have hoped but they hoped to prove everyone wrong and come out victorious in their sections game.

Although there may have been a lot of ups and downs for this season, the team and Valentini sees it as a major success,

“As a team, we are really young and being able to grow and learn how to bounce back from losses are a major step in the right direction,” Valentini said. “We want to create a winning culture for Hopkins hockey and this is the first step towards accomplishing that.”

It has been a long season full of all kinds of emotions but their record doesn’t define them as a team, or the major progresses all the players have made individually and as a team.

Hopkins fell to Blake 9-1 in the first round of sections. Valentini scored the only goal.