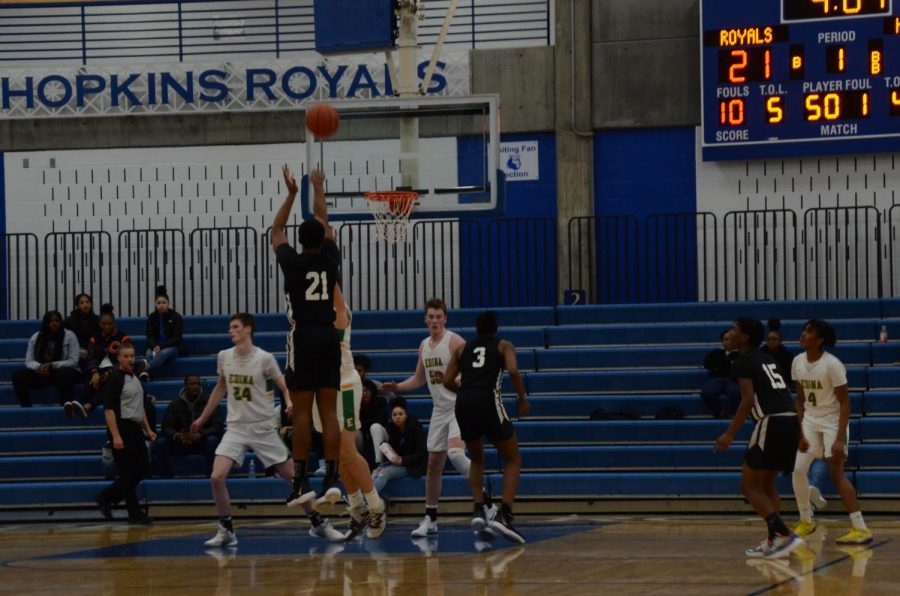 Andre Gray, junior, attempts a three pointer in a game against Edina. Gray and the Royals are currently ranked fifth in state.

The Hopkins Boys Basketball team started out the 2019-20 season in an underwhelming fashion. Starting out the season with a 1-2 record was something that most people didn’t anticipate.

Having four new transfers resulted in doubt with the chemistry that each teammate had with one another.

However, Andre Gray, junior, didn’t have any doubts that the team would mold together and become a force to be reckoned with.

“This is a new team, but everyone pretty much knew each other and it was all about getting comfortable on the court with everyone,” said Gray. “The best game plan is to get better, and the team chemistry was already at a good level, we just needed to increase that level.”

Recently the team has successfully built up their chemistry which has brought in a 6-2 record for the month of January, and has two more wins slated in the record book in early February.

On Feb. 11, their seven game win streak came to an end with a heartbreaking six point loss versus the number one team in the state, the Eden Prairie Eagles.

In a game where the refs were questionable with their calls, Kerwin Walton, senior, still managed to score 38 points. In the most recent three game span, Walton has averaged almost 40 points a game. That includes a stellar performance versus Totino-Grace in which he scored 42 points.

Leading the team in scoring isn’t something that Walton likes to put his focus on. Walton approaches each game with a similar mindset to that of NBA star Kawhi Leornard, with a calm and level-headed thought process, it leads to production on the court.

“During the game I’m just more focused on each possession. How many points I score doesn’t concern me as long as we are winning,” Walton said. “My mindset is to get better everyday. Whether it’s in practice, games, or in the gym by myself. I’m always trying to find ways to improve myself.”

The Royals are looking to wrap up their season finishing strong, and get to that chemistry point where they know each other like the back of their hands’.

All that matters in the end for this Hopkins Boys Basketball team is the last six games, three in sections, three in state. By getting to play in all six games will require the team to lock in and play as team.

“We just need to be able to play better together. To understand how things work in terms of Novak’s system, and being able to learn how to play; to pass, to cut, play defense, not just guarding your man, but the whole team,” Walton said. “Just being unselfish, a whole lot of unselfish basketball.”