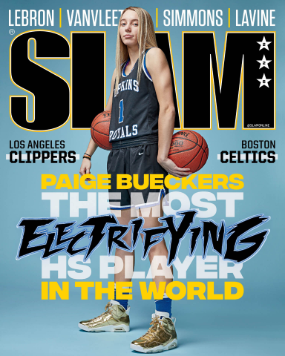 Paige Bueckers, senior, on the cover of SLAM magazine. Bueckers is the number one ranked player in the nation.

Being a state champion, a McDonald’s All-American, USAB Female Athlete of the Year, and a commit to UConn all in Paige Bueckers’, senior, trophy case, she will add appearing on the cover of SLAM magazine.

Bueckers is currently the fifth woman to appear on the cover of SLAM magazine with the first woman being Chamique Holdscaw in 1998 and the most recent being A’Ja Wilson just a few short months ago in Sept. 2019.

Not only is Bueckers the fifth woman to do so, she is also the first high school girl to make the cut of the esteemed cover of SLAM basketball magazine.

“It means everything to me, as a kid I always used to look through SLAM and flip through it, same with Sports Illustrated kids,” Bueckers said.  “I never would’ve dreamed of being on the cover so it just means so much to me.”

Having this accolade in the locker of accomplishments for Bueckers bring even more light to the game of women’s basketball.

“It’s really huge. It’s what Kobe lived for and what he wanted for his daughter. I just want a lot of respect for the women’s game,” Bueckers said. “They don’t get it as much as the guys so just help pave the way and help shine light on the girls game.”

The SLAM cover unveils a potential for Bueckers to be bigger in the perspective of role model. As an 18 year-old, she has unique opportunities to spread her message and what her core beliefs are.

“Work hard and live a happy life. Don’t let the basketball game change how you live. Work hard and love the people around you and just enjoy life,” Bueckers said. “Don’t take a loss as a loss, take it as a lesson.”