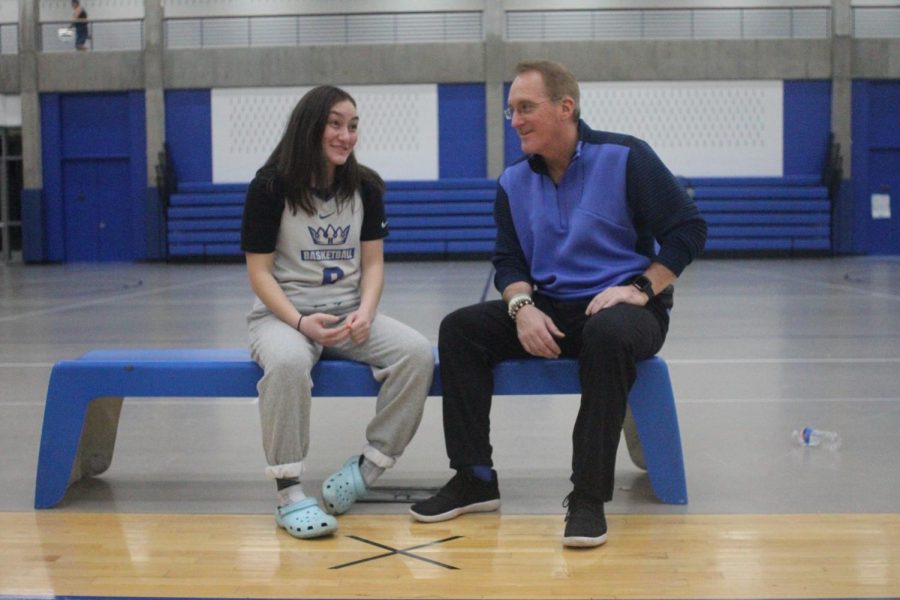 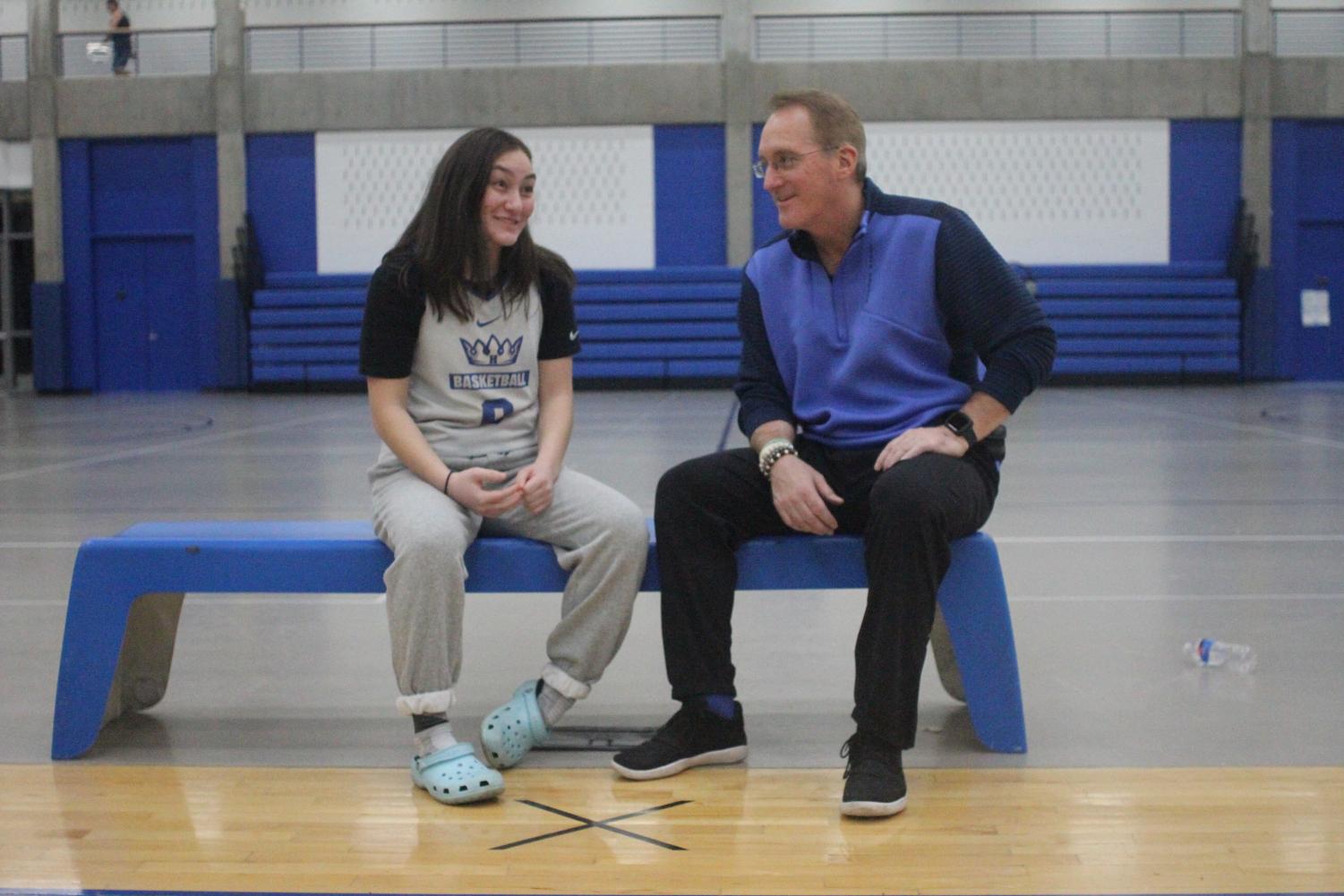 In what looks like a mundane storage room beside the cardio room most students remember for the 10th grade heart monitor tests, sits a veritable shrine to the greats who have donned and will don the blue and white of Hopkins girls basketball.

Pictures of icons such as Leslie Knight, Nia Hollie and senior sensation Paige Bueckers are scattered around the wall, testaments to their accomplishments. Next to the white board hangs the countdown clock to the next game with a sheet of paper featuring the iconic lion logo next to whatever team will get demolished by head coach Brian Cosgriff and Co. The seven state championships sit on the far counter of the room, each with a picture to immortalize the members of the teams as the best squad in Minnesota during that season.

But if you look closely at the collection of state trophies, you’ll see one of the girls pictured in most of the team photo is much smaller than the rest. She was not officially a member of the team then, but her appearance was a preview of what was to come down the road.

That girl is the coach’s daughter, Brooke Cosgriff. Now a senior, she has shifted from sitting in front of Hopkins legends to standing in a jersey and being legendary in her own right.

When she was younger, Brooke had an active presence in the stands of Royals basketball clashes. Years and years of watching her dad coach some of the best players to come out of the state and rack up state title victories made picking up the ins and outs easy.

“I don’t know if I ever taught her. She’s just always around the game cause if she wanted to see her dad, she was gonna have to go to the games,” said Coach Cos.

Brooke began formally playing basketball in the third grade and grinded it out for eight years to prepare for finally making getting the call up to her dad’s team. Cosgriff said his daughter is “not the most aggressive or physical player” but also adds that Brooke has a very high basketball IQ and works as hard as any player on the squad.

All of this culminated during her junior season, when Coach Cos had the honor of telling his beloved daughter that she had made the varsity roster. Brooke had seen so many players reach the heights of playing for the prestigious program and she felt excited to join the ranks of such a strong team.

Now that Brooke finds herself in the twilight of her high school career, she admittedly doesn’t have as much free time as she used to. With schoolwork, college applications, and a busy social life, it can be fairly difficult to find a lot of time to spend with her dad, which means that the time spent on the hardwood is extra special.

“She’s a high school kid and she has her social life and I don’t get to see her all that much, so when she’s at practice we get to spend some quality time together,” Coach Cos says.

While the Cosgriff connection is as strong as any father-daughter relationship, Coach Cos does not hand out any special favors to his daughter and treats her like any member of the team.

“She never had any special privileges and she’s just part of the process. She’s had to work for everything she’s ever gotten and when it comes to playing time on varsity, everyone who has ever been there know she gets no special favors,” said Coach Cos.

And much like any father-daughter relationship, there are some moments where the daughter feels a sense of embarrassment for something her dad does. For the Cosgriff family, these moments come when Coach Cos channels his inner Bobby Knight and gets testy with Minnesota State High School League officials.

“It gets uncomfortable sometimes, but sometimes I give him a little kick and tell him to chill out a little bit,” said Brooke.

The family culture permeates the culture of the Hopkins girls basketball program more than just through the Cosgriff family. Sophomore guard Alayna Contreras’ dad is also involved with the team as an assistant coach, and having those family connections within the team help strengthen the relationships between the players and coaches.

“The players are over at our house sometimes and they happen to see our parents, so having those relationships off the court help the team connect with the coaches better.”

The program is very much a family and the girls look at each other not just as teammates, and you just from how unselfish the team is by making the extra pass on the offensive end or working hard to lock down the opposing offenses on the defensive end.

Brooke and Coach Cos are the embodiment of what the word “family” means to Hopkins basketball. It is all love with the Cosgriff family both on and off the court. No matter if it’s in the crammed announcing booth at Royals baseball games or the Cosgriff household, the family ties are doubled-knotted.

Coach Cos never passes up the opportunity to make someone’s day better. He is the kind of person who will show up unannounced at Hopkins baseball practice with boxes of pizza for all of the players and coaches. He’ll preach love and positivity whenever he has the chance, and he genuinely cares about everyone he meets and everything he does.

“He’s very empathetic and cares about others, and if you get to know him well enough, he’ll do anything for you,” said Brooke.

Caringness must run in the family, as Coach Cos constantly praises his daughter’s kind heart.

“When her mom was sick this week, she was fixing her dinner and was concerned about her. When her grandma shows up to the house, she helps her up the driveway. You don’t even have to ask her to do things like that. That’s just the kind of person she is,” said Coach Cos.

That kindness transfers over to Brooke’s attitude on the bench as well. Since the Royals flatten just about every opponent they face, the reserves often get a chance to shine in the closing moments of blowout wins. Brooke, who is one of the reserves, cedes her court time to get other reserves a chance to shine on the court instead of her.

“There hasn’t been a time where I’ve put her in the game and she says,’You need to get so-and-so in. She hasn’t played yet.’ I think that’s the mark of a really good person,” said Coach Cos.

When asked about her favorite moment with her dad on the court, Cosgriff points to the moment when everything came full circle after the state championship game last year.  The had Royals completed their first undefeated season in the Coach Cos era with a 74-45 victory over Stillwater in the state championship game. The father-daughter duo embraced as Brooke finally had the opportunity to be on the court during a Hopkins state title win instead of in the stands.

“He came over and gave me a big hug and it meant a lot to me because it showed that all of the hard work and time had paid off,” said Cosgriff.

Brooke’s shift from the front of the team picture as a non-roster member to being able to participate in the state tournament as a player has been an awesome experience having been around the team all her life.

“You see all these other girls and their excitement and they’re so happy about winning it, so now that I’m on the team it feels like I’m going through the same exact thing I witnessed all of them go through,” said Brooke.

The Royals are off to a blazing hot start to start the 2019-20 season, and Brooke and Brian are striving to add one more trophy to the team room before Brooke exits the walls of HHS and enters the world of college.