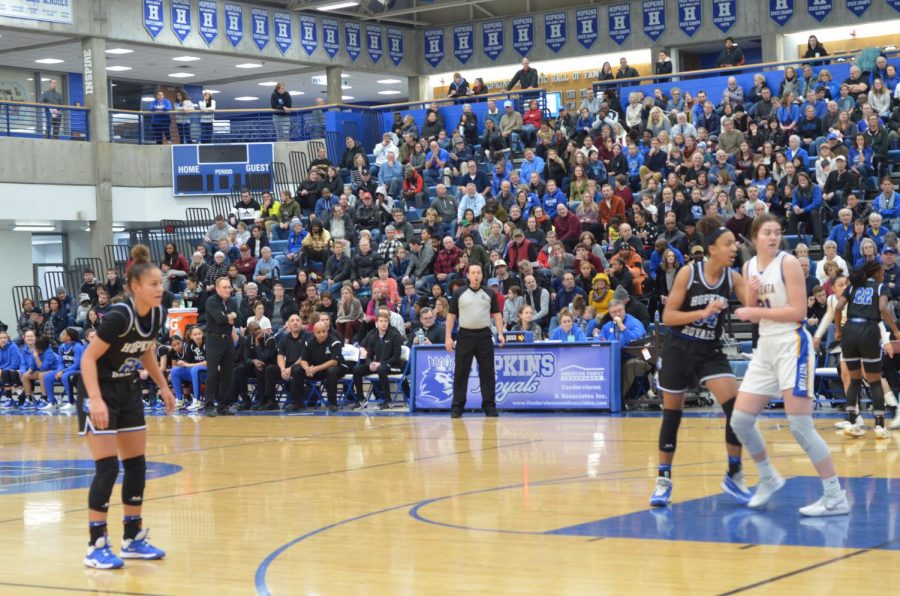 Taylor Woodson, freshman, and Maya Nnaji, sophomore wait for an in bound play. The Royals defeated the Trojans 87-77

On Tuesday night, the Hopkins Girls Basketball team faced the Wayzata Trojans in what was possibly the biggest and most anticipated game of the season

The Royals and the Trojans have consistently been two of the best teams in the state over the last few years. Last season the Royals handed the Trojans their only two losses in the regular season, and in the Section 6AAA final.

The top two teams in the state started trading buckets early in the game. The first half went back and forth as Wazyata’s three point shooting gave them an early lead, while Bueckers’ 21 points kept the Royals in it. The first half ended with a 35-32 lead for Wayzata as Annika Stewart hit three consecutive three-pointers to give the trojans momentum going into the half.

The Royals seemed to come out of the half with more fire as they went on a quick run and took a ten point lead to begin the half, Bueckers cooled down in the second half, but this didn’t seem to faze the Royals, as Maya Nnaji scored 18 points in the second half and Alayna Contreras brought a spark from the bench.

The game came down to the wire, but it was ultimately Contreras who came up big for the Royals, as she hit a crucial three-pointer and got a steal to put the game out of reach for the Trojans.

Even though Wayzata came away with a loss, they still had big performances from their star players. Jenna Johnson had 28 points and nine rebounds while Annika Stewart had 22 points and eight rebounds.

The Royals were led by Bueckers 27 points, while Nnaji contributed 22 more and Contreras poured in 11 off the bench.

Hopkins will face Wayzata once again on Valentines Day at Wayzta High School as the Royals look to sweep the Trojans on the season.

On the boys side, Hopkins took victory of Wayzata, this game being at Wayzata High School.

The Royals took a comanding early lead. The lead reached 20 early in the first half and forced Wayzata to use three early time outs.

The score was 28-5 when Wayzata started to score and go into halftime with a 20 point defiset. Halftime score was 40-20, Hopkins.

An early run made by the Royals made the game unreachable in the second half for Wayzata.

Late in the game, the lead was up to 40 points. The benches were cleared which gave players an oppurtunity to show for themselves.

Jaelen Treml, junior and Jack Hernandez, junior led the scoring off the bench with 13 and five points.

Kerwin Walton, senior had a game high of 17 points. Andre Gray II, junior also contrubuted with 13 points and a good all around performance.

“It felt like everything was going great and everybody was playing together,” Gray said.

Carter Bjerke, sophomore led the way for the Trojans with nine points.

Hopkins will face STMA this friday, Jan 24, at 7pm.