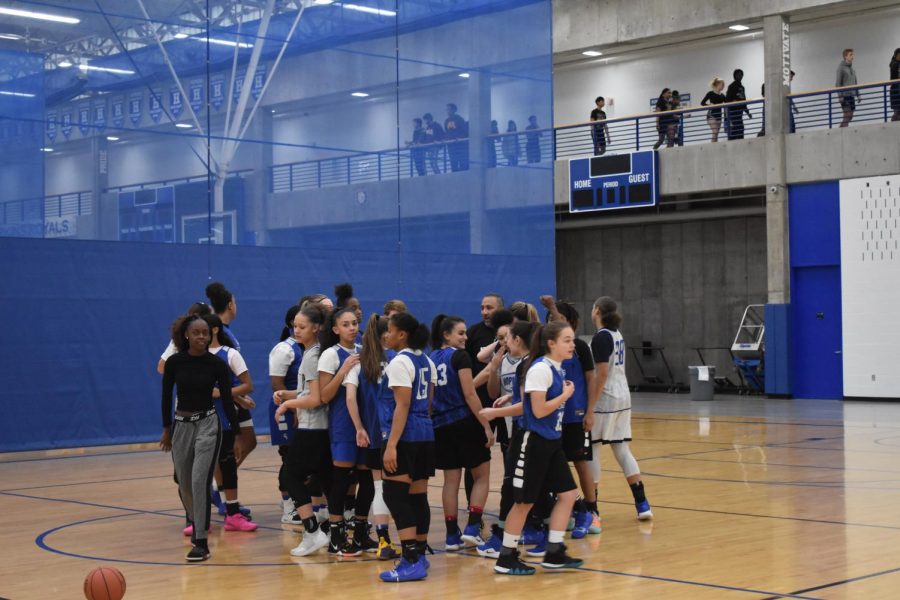 The girls basketball team breaks it down after a practice. The squad is currently ranked fifth in the nation, according to MaxPreps

Through 15 games the Royals are undefeated. With their closest margin of victory being 18 points against Park Center and Eden Prairie.

This win streak dates back all the way to the 2017-18 season, more specifically the state championship. Hopkins fell to Eastview 63-68. 42 games later, they still haven’t lost.

However, the Royals will face their toughest test this season tonight, when the Wayzata Trojans come to Lindbergh Center in a highly anticipated 1v2 matchup.

Obviously, much of the Royals’ success can be contributed to Paige Bueckers, senior. Bueckers is the best player in the nation with coach Brian Cosgriff calling her “the female LeBron James”.

The nation’s top player is averaging 20.4 points a game, 9.5 assists per game, and five steals per game this season. However, Hopkins has many talented players that help win games.

Joining Bueckers are sophomore forward Maya Nnaji, another top recruit who averages 18 points a game, Taylor Woodson, freshman, who received a scholarship offer from Minnesota as an eighth-grader, and averages 14.3 points per game.

Add in sharp shooting senior K.K Adams and that makes up the best offense in the state, scoring over 87 points per game.

The second best team in the state, Wayzata, also brings talent in bunches.

Nebraska commit and McDonald all-american Annika Stewart, senior is averaging 15.5 points per game. Along with her, Utah commit Jenna Johnson, junior, and sophomore stud Mara Braun are averaging 23.4 and 14.1 points per game, respectively.

Wayzata has waited all year and all offseason for this game. After a record of 26-3 last season, the Trojans have high hopes for this season but with Hopkins being in the same section, a pretty big roadblock stands in the way.

All three losses last season came to the hands of Hopkins, two in the regular season and once in the section championship.

For the second straight year, one of the best two teams in the state will not make the tournament as there can only be one winner from section 6AAAA, obviously.

This is the first of two meetings between these rivals, the second coming on Valentine’s day. That game will be in Wayzata.