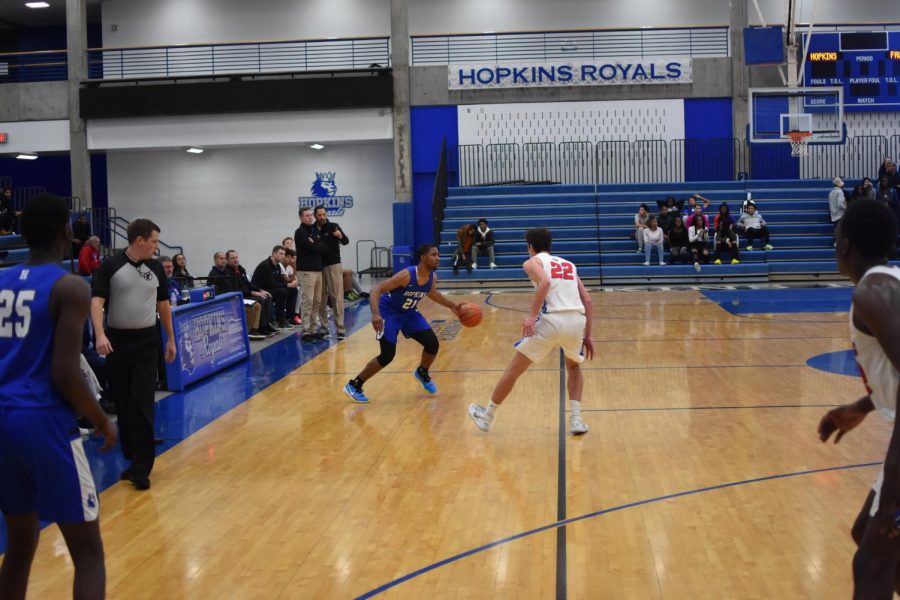 Andre Gray, junior, performs a crossover in a game against Armstrong. Gray and the Royals have a current record of nine wins and three losses

As the basketball season nears the halfway mark, the elite teams begin to separate themselves from the rest. For Hopkins, they seem to be stuck in the middle.

The Royals have showed they can compete with the best in the state, defeating teams such as Armstrong, Minneapolis North, and most notably, Minnehaha Academy.

Hopkins has also taken steps backwards, recently falling to DeLaSalle at home 46-64. This defeat was one of the worst defeats in Hopkins basketball history.

Thursday brings another opportunity for the Royals to put their name at the top as they will take on the best team in the state of Minnesota.

Lindbergh Center will play host to the undefeated Eagles of Eden Prairie, one of two matchups between Hopkins and EP this season.

The Eagles had high expectations coming into the year, and they have lived up to the hype. Taking victories over top teams such as Cretin-Derham Hall, Prior Lake, Eastview, East Ridge, Chaska, and Shakopee.

EP is led by four spectacular seniors who have been starting for three straight years. Drake Dobbs and Connor Christensen are committed to D1 schools Liberty and Dartmouth. Austin Andrews is committed to University of Minnesota-Duluth and John Henry is a sharpshooter that hit from the deepest ranges.

Those four are all averaging double digits in points and with all of them being able to score from anywhere on the court, it makes for a deadly starting lineup.

Hopkins goes through Kerwin Walton, senior. The 6’5 shooting guard is averaging almost 25 ppg and just recently had a 33 point outburst against Buffalo on Tuesday.

The Royals will need a huge game from him to have any chance of winning. Walton will need some help along the way with multiple players potentially having big games.

Look for juniors Jalen Treml, Xavier White, and Andre Gray to share the scoring load as well as sophomore bigman Elvis Nnaji to score at the rim.

It will take a team effort from Hopkins to pull of the win as the Royals look to solidify themselves as one of the top teams in Minnesota.