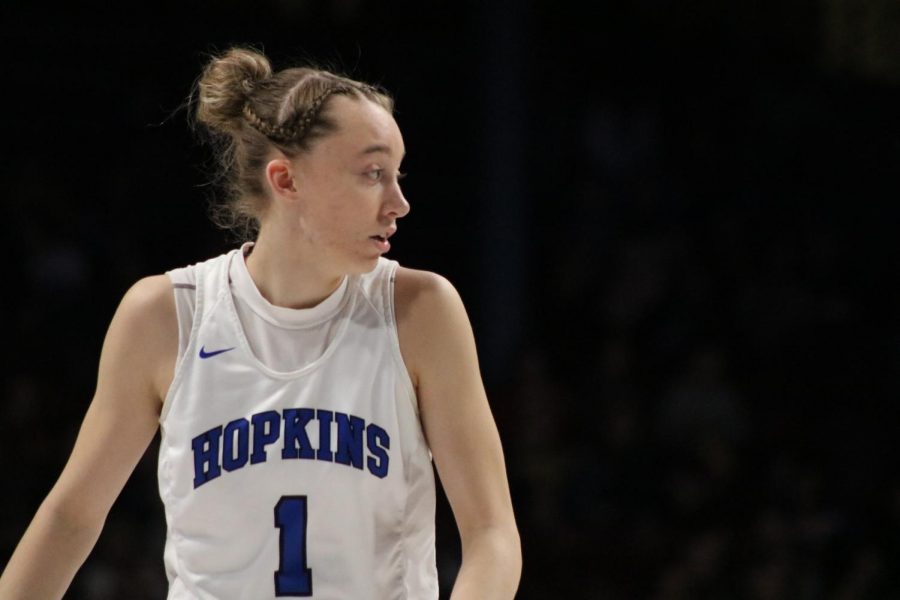 Paige Bueckers, senior, in last year's state championship. Bueckers and the Royals will face a real test this Friday, against Farmington.

After starting the season 5-0 and winning every game by at least 35 points, the Hopkins girls basketball team will have their first real challenge on friday against Farmington.

Farmington came into the season ranked #3 in the state only behind Hopkins and Wayzata.  After going 22-4 last season and losing their section final to Lakeville North by 2 points, Farmington is hungrier than ever.

Farmington is led by 6’4 center, Sophie Hart, who has a Division 1 offer from the Gophers and has been previously invited to the USA Basketball Camp.

Farmington are 3-0 this season and already have a statement win under their belt against last year’s state finalist Stillwater. Many players believe this could be the toughest opponent Hopkins faces this season.

“They’re one of the best teams in the state right now and have a lot of size. We’ve scouted them, gone to a couple of their games and studied film on them” said senior captain Tehmi Bozicevich.

The Hopkins Girls Basketball team are ranked #2 in the country by USA Today, their goal this year is to make it to nationals in New York, but for them to accomplish this goal, they must go undefeated and repeat as State Champions. This game could be crucial as this might be Hopkins’ biggest test this season.

Coach Brian Cosgriff believes that this could be a good test for Hopkins, as they prepare for the game, he believes there are many aspects of the game the Royals should focus on to be successful.

“We want to play hard, play fast, play smart, have great attention to detail and total concentration into playing to our potential so as to be the best we can be” said Cosgriff

Hopkins take on the Tigers at Farmington High School at 7:00 pm on Dec. 6.