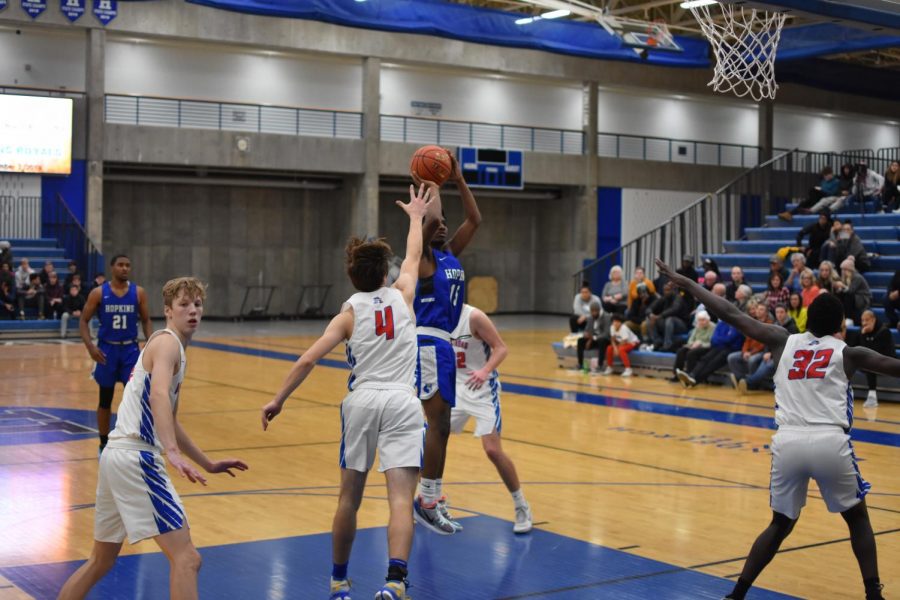 Cornell Richardson, senior, shoots the ball over and Armstrong player. Richardson and the Royals won this game 79-56.

The answer is Hopkins.

Cornell “Nelly” Richardson, senior, is a 5 ’11 point-guard from Osseo and transferred to HHS this year with plans of helping the basketball team win another state championship.

The main reason Richardson decided to transfer to HHS is due to some personal reasons over the summer, but he likes being here because of opportunity.

“HHS has better opportunities for college, it has a nice reputation with high standards for their students,” Richardson said.

For now, he just wants to focus on school and basketball, he’s striving to earn a Division-one scholarship and he thinks HHS is a great place to do so.

He’s been happy with his decision so far and overall loves the community at HHS.

“It’s nice, I like having four classes at a time because if you get behind, it’s easy to bounce back, teachers help out after school and it helps me succeed. After I go to ASC, I’m either at open gym or working out, it’s strictly business.” Richardson said.

Although the basketball season hasn’t quite started, Richardson has been able to work out with the team and his teammates have already noticed the impact he can have on the team.

“He brings intensity to the defense, he can be a floor general and give energy on offense,” said Andre Gray, Junior.

Richardson has had friendships at HHS for a long time. Not only has he played against current HHS players, but he was also teammates in elementary school with Kerwin Walton, Senior.

“Cornell’s gonna be one of our best perimeter defenders. He’ll be coming in as one of our primary point guards and will create plays for himself and others,” said Walton.  “He’s gonna help us a lot so I’m glad he’s at Hopkins. I think he’ll play a big role for us heading into the state tournament.”

Richardson is still close with his friends at Osseo, there doesn’t seem to be any hard feelings and his friends are happy for his success.

“I get some backlash but not the point where they don’t want to see me succeed, they are happy for me but give me a hard time sometimes to be funny,” Richardson said.

Due to frequent transfers to HHS, some make the assumption that we recruit players, Richardson asserts that it’s not the case for him.

“I don’t think it’s true, I never was recruited, it was my decision,” said Richardson

For now, Richardson is very focused on his academics, earning a college scholarship, and winning another state-championship for Hopkins. He loves to emphasize that “it’s strictly business.”