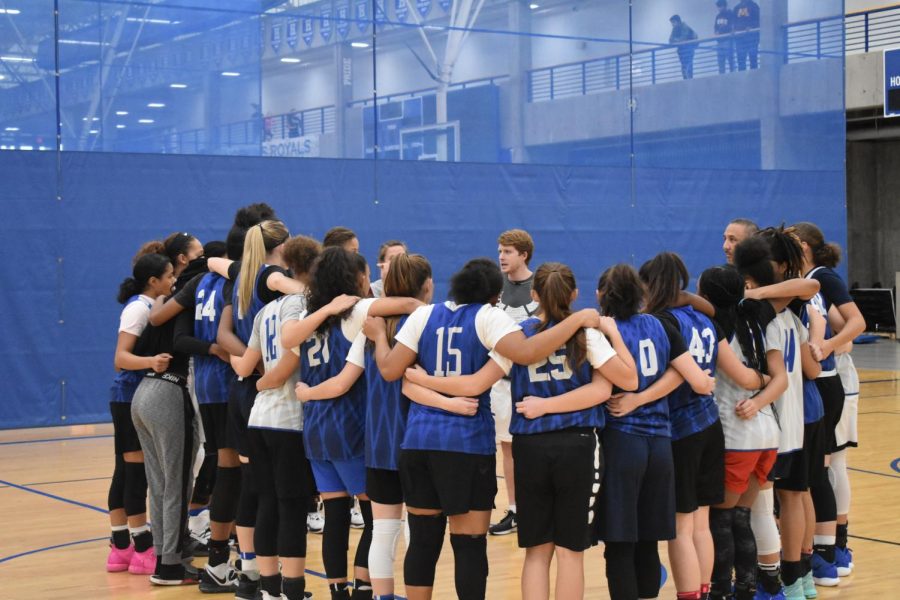 Girls basketball huddling during a practice. The team has huge expectations after winning state last year

When a team has a season like the Hopkins Royals girls basketball team had last year, it is difficult to raise the bar even higher. Their undefeated season culminated in their first Class 4A state championship victory since 2015 and they steamrolled through everyone the state had to offer.

Royals head coach Brian Cosgriff knows how difficult it is to raise the bar after last season, but his main goal is taking the season as it comes.

The Royals are more than ready to carry on their success from last season and continue one of the greatest basketball dynasties in high school girls basketball. As a result of their prowess, the Royals have received national attention and are being considered one of the best teams in the nation. Numerous top 25 polls have listed the Royals somewhere in the rankings, including being ranked No. 9 in the nation by MaxPreps and No. 3 by USA Today.

A bulk of the roster from last year’s state championship is still intact. Aside from the departure of their second-leading scorer Dlayla Chakolis, most of the key pieces, including four starters and some key reserves, are back in hopes of repeating as state champions.

The relationships that have been built by last year’s perfect season have made coach Cosgriff’s job building this year’s squad easy.

“We’re basically the same team. We know what we have because everyone’s back from last year minus a couple seniors,” said Cosgriff.

It is especially easy to build the team when the best players on the team are also some of the best players in the nation. Senior point guard Paige Bueckers is ranked No. 1 on ESPN for the 2020 recruiting class and officially committed to another basketball dynasty for her college career by signing with University of Connecticut Huskies last week. With her commitment, Bueckers feels like a weight has been lifted off her shoulders.

“Since the process is over, I can just focus on senior year and just enjoying that. It feels a lot better knowing where I’m going and just getting that over with,” said Bueckers.

Bueckers had a couple other schools on her docket such as Notre Dame, UCLA, and South Carolina, but she ultimately came to the conclusion that she would join her dream school in Storrs, CT.

Bueckers has been a focal point of the Royals dominant run over the past few years, receiving varsity time as early as eighth grade. After four years as an underclassmen, she finds it hard to believe that she is finally a senior leader.

“It feels kind of crazy because it feels like I’ve been on this team forever, so to finally be a senior is kind of mind blowing,” said Bueckers.

In the underclass, sophomore forward Maya Nnaji has received interest from many top college programs and finds herself in the top 10 of the 2022 recruiting class.

“Ever since I started playing basketball when I was four, I’ve always tried to be the hardest working player on my team,” Nnaji said. “My teammates back then were saying ‘You need to calm down, it’s just basketball,’ but it’s paying off now and college coaches are starting to notice.”

Her high ranking has not made Nnaji complacement however. Over the off-season, she has focused on building up her strength so she can exert her dominance in the post.

“I’ve been in the weight room a lot. I’m just working to get stronger so I can finish through contact cause I’m gonna get fouled in the post a lot,” said Nnaji.

During the recruiting process of her brother, Zekei, who is currently a freshman star for the University of Arizona Wildcats, Maya figured out what she is looking for in schools once her own recruiting process kicks into full gear and she starts making campus visits.

“I want to go to a school with a good relationship with the coaching staff and a family environment since I’m going to be leaving home. I’d also like an offensive style that I fit into and play well with,” said Nnaji.

Nnaji isn’t the only underclassman with a starring role on this year’s Royals team. Amaya Battle, sophomore, will return to her starting guard role in her third year at the varsity level and the Royals also have a deep bench of underclassmen, with Alayna Contreras, sophomore, and Taylor Woodson, freshman, leading the way.

The youth of many of the Royals up and coming stars is not a hindrance to the Royals’ success. In fact, Nnaji actually believes that having a core of young players is beneficial to the team chemistry and on-court product.

While the Royals are projected to be one of the best teams in the state of Minnesota once again, this season is a bittersweet one for coach Cosgriff, as this season will be his last with his daughter, Brooke. Cosgriff says that he cherishes the time he spends with Brooke on and off the court.

“Any time I get to spend with my daughter is special. Basketball is just the icing on the cake,” Cosgriff said. “I feel so blessed to have such a great kid who’s so nice and so caring, and I want to enjoy this last ride with her.”

The 2019-20 season is set to be one of the most exciting in the history of Hopkins basketball. While most of the members of the team are humble and cautious about the expectations of the team, Maya Nnaji perfectly laid out the heights that Royals will be trying to reach over the next several months.