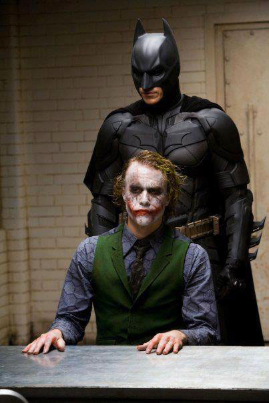 Heath Ledger and Christian Bale as The Joker and Batman

After the release of The Dark Knight Movie in 2008, actor, Heath Ledger, was rightfully praised for his portrayal of the notorious killer clown known as the Joker. His incredible acting even earned him an Oscar after his death for best supporting actor.

Many believed that nobody would ever be able to match Ledger’s performance. That changed in October of 2019 when Joaquin Phoenix gave his interpretation of the character in the Joker movie. Now the question has been raised as to who’s performance served the most justice to the iconic Joker character.

The Joker is defined as a homicidal psychopath that is an intelligent and diabolical criminal mastermind. In order to truly understand which actor was the best joker they need to be judged based on this definition.

In this case it is very clear that Ledger’s performers makes him the more dominant joker.

In the movie The Dark Knight, Ledger’s Joker would post videos of him terrorising his victims before killing them. However, when Phoenix’s Joker killed the three boys on the train it was so surprising and spontaneous that it seemed as if he got carried away with himself rather than purposely committing a crime.

In addition, Ledger’s character looks the part of the Joker. All the small details such as his tongue licking his lips at random moments, his quick and sporadic body movements, and having the iconic joker laugh at seemingly the perfect moments are what make ledger’s performance so amazing.

Although Phoenix’s performance wasn’t the perfect joker it was still a great performance. He was able to send an important message of what it is like to be a mentally unstable person in lower class society with his psychotic reactions to the depressing situations in his life.

Phoenix did an amazing job in his role, but it was not fit to be under the title of Joker.