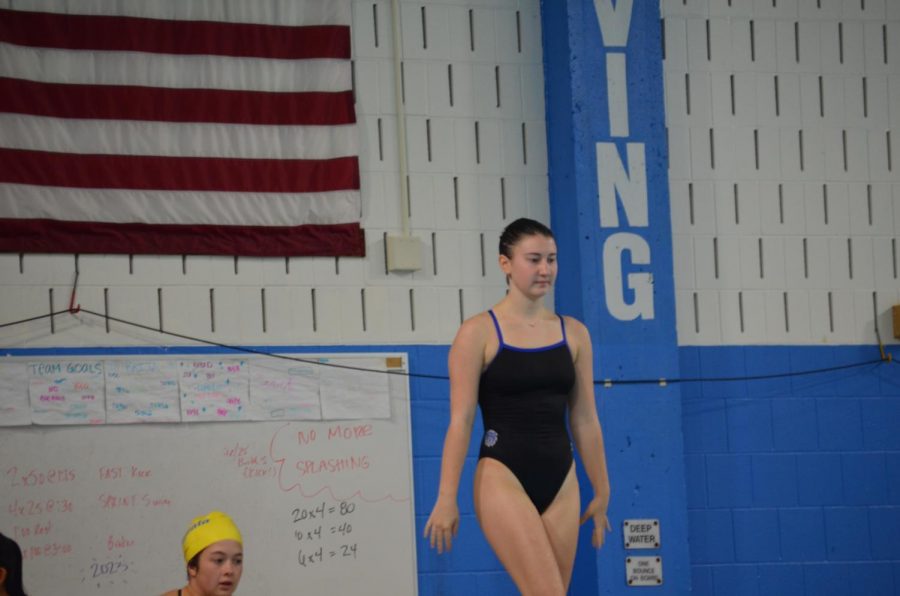 Kaija Pratt, senior, preparing for a dive. Pratt looks to have a deep run in sections and make it to state.

Kaija Pratt, senior, has spent years honing her craft on the diving board. This year she hopes to put it all together and cap off her high school diving career with a trip to state.

Pratt has been diving for the Royals since 8th grade and her tenure has led to her being named captain this season.  Pratt feels it’s her responsibility to help create a great culture and set the team up to strive even after she graduates next spring.

“As a captain, I have made it a goal of mine to really set a good example for the younger divers. The team will be in a growing stage next year, as we will graduate four divers, and it is important we help shape the next leaders of the team,” said Pratt.

Along with diving, Pratt is also on the Royals gymnastics team. She was named a captain for both her junior and upcoming senior season. Pratt feels her roots in gymnastics have given her a big advantage on the diving board.

“Diving and gymnastics go hand in hand. I feel I am a lot more comfortable in the air and doing flips while diving because of my history with gymnastics,” said Pratt.

Pratt has dealt with some injuries this season and has had to sit out a few meets.

“At the Maroon and Gold meet at the U of M, my knee buckled and I had to sit out. The doctors said it was a sprain in my MCL,” said Pratt.

With about a month left in the season, Pratt has plenty of time to get back to health and find her groove on the board and the Royals will need her as they prepare for postseason swim.

Pratt plans on diving collegiately next year and is getting significant interest at the division 1 and division 2 levels.

“I am excited for the challenge of diving in college and grateful for the opportunity to continue playing the sport I love competitively,” said Pratt.