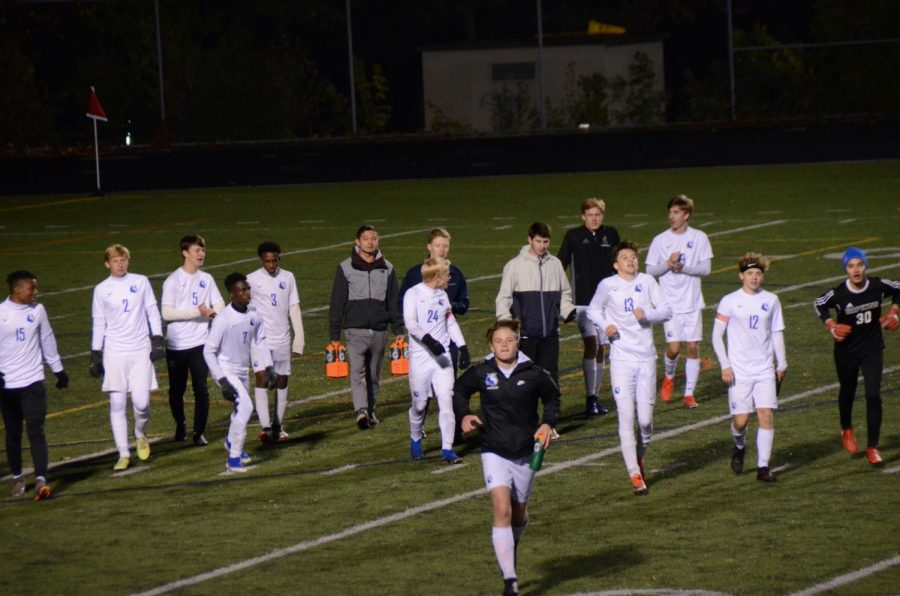 The Royals jog back to the bench after halftime. The Royals lost 1-0.

The Hopkins Royals boys soccer squad wore the glass slipper for two games before it was time to take it off.

After a valiant effort against top seed Minneapolis Washburn, the Royals’ season ended. Players on the ground in tears looking up to see their opponent celebrate.

The score after one half was zero all. However, senior Darley Florvil put the ball bottom left in the net to give the Millers a 1-0 lead with around 25 minutes left.

Wasburn was pushing all half to get a goal as they clearly did not want the game to go to overtime. Hopkins didn’t have a true scoring opportunity all game.

Both sides played disciplined games on the defensive side. Although, Florvil was offside a total of eight times.

The first half ended on a bang when Royals’ senior goalkeeper Alex Quintero punched the ball away and was almost called for the penalty. The thousands of Miller fans thought it should’ve been called.

Then in the final ten seconds of the half senior Ronaldo Rosas-Sanchez looked to start a counter attack for the Royals when a Washburn defender took him out, while everyone in the stands was looking for the red card, nothing was given.

Washburn is most likely going to be the two seed in the upcoming state tournament after losing to Edina in the very first game of the year. The Hornets will take the one seed.

Despite the boys leaving the game with their heads low, nobody believed they were going to be in this situation. A true Cinderella story.