After another upset, boys soccer one game away from state 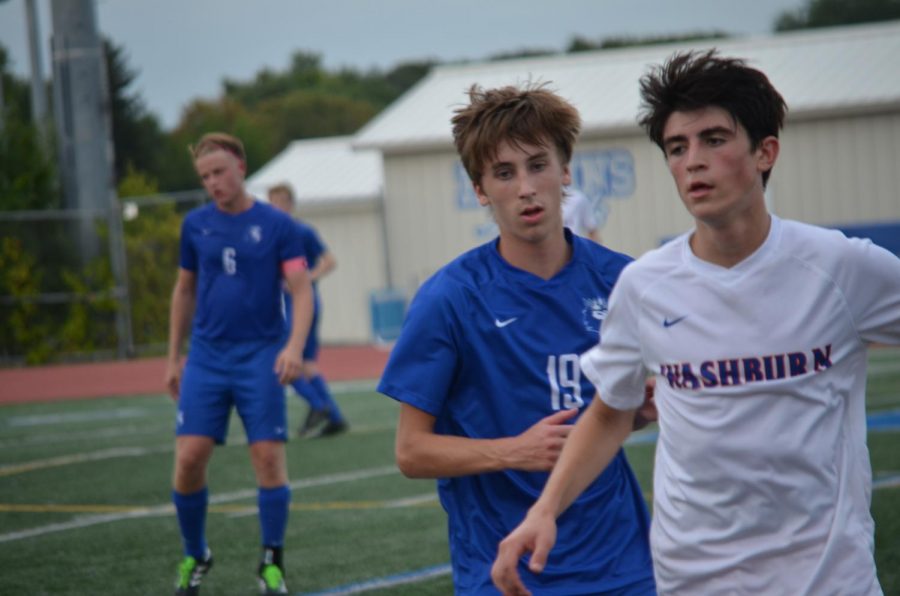 Will Hess, junior, covers a Miller during a thrown in. Hopkins lost this match 10-0.

On a cold, windy, and just an all around terrible day for any type of sporting activity, the Hopkins Royals boys soccer team were back to their upset ways.

After taking down the Minneapolis Southwest Lakers with a late OT goal, Hopkins defeated the Orioles of St Louis Park.

SLP was ranked number two in the state, but after this loss at home, they will fall for days to come.

The star of the game was senior Evan Komschlies. He scored twice, once off his head and the other after a scramble in front of goal that resulted in a 2-0 lead for the team in white.

Moments after the Royals took the two goal lead SLP struck back, scoring to cut the lead in half. The comeback was on, but the Royals weren’t having it.

The game went on and as time ticked down the atmosphere became more electric, it was non stop noise from parents, fans, and coaches barking out random instructions on both sides.

The entire Hopkins team started jumping for joy like little children on Christmas. To them, Christmas came in October. After a 5 minute mosh pit, the boys went over to enjoy the victory with the student section, embracing their friends with screams and squeals.

Finally, it was time to shake hands with the opponent, some of whom were still on the ground, not believing their season ended earlier than expected.

Now, the Royals have to take down the one seed and possibly best team in the state, Minneapolis Washburn. Beating Southwest and SLP was actually the easy part. Hopkins will have to beat the three top seeds in the section to get to state.

The Millers are lead by three of the best players Minnesota has ever seen. Seniors Darley Florvil, Jameson Charles, and Vilas Stolpman.

Hopkins and Washburn met in late September and it was over before it even started. A 10-0 throttling at Hopkins for the Millers was their biggest win of the season.

The Millers have everything including experience at the coaching level. Head coach Aaron Percy is in his 23rd season and has coached more than 350 matches.

One game to go to state. All they have to do is beat the best.