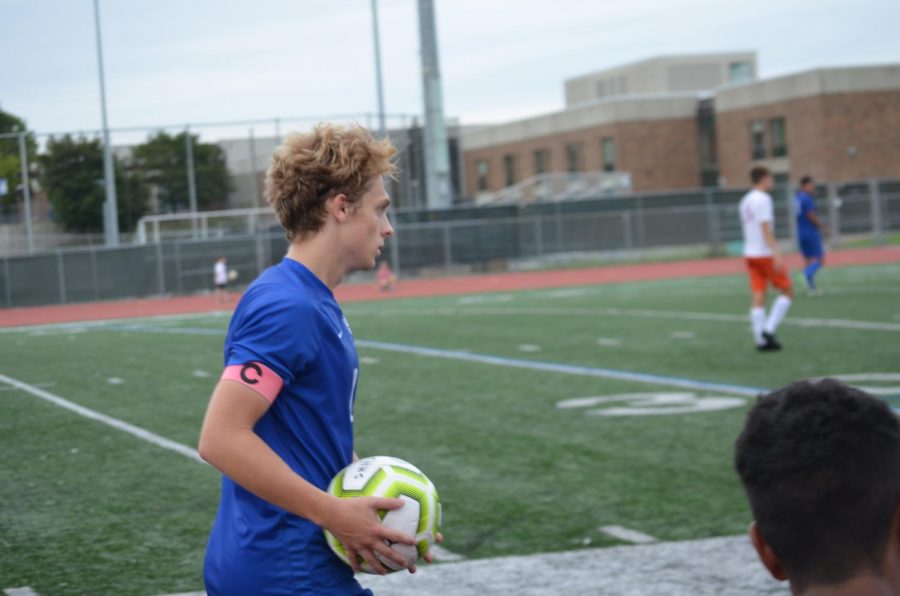 Tyler Elliott, senior, prepares for a throw in. Elliott and the rest of the Royals face SLP in the semi-finals of sections

Pershing Park Stadium was the sight of an upset for the ages last night.

Players broke down in tears after the win, pounding the ground in joy after what was possibly the hardest they have ever worked.

The Hopkins Royals boys soccer team stole a victory away from the grasps of the Minneapolis Southwest Lakers with a score of 1-0, finishing in OT.

Ronaldo Rosas-Sanchez, senior, headed the ball beautifully in the bottom right corner to give Hopkins a win, just a few minutes into sudden death overtime.

The weather was cold and the field was wet, but the Royals are moving on and that is all they care about.

The Lakers had a simple strategy from the start of the game, over the top through balls to pacey sophomore strikers Abdiwassa Mussa and Charlie Smith. They didn’t realize that Hopkins had some pacey centre backs of their own.

Seniors Evan Komschlies and Charlie McAllister controlled the game and with a world-class performance from another senior, goalkeeper Alex Quintero, the Royals won.

After starting the game fast with a shot off the post by Hassan Hassan, junior, and another great chance by junior Ismael Castro Montoya, the Royals felt like they should’ve been winning.

However the second half was a much different story. The Lakers dominated the whole 40 minutes and came inches to scoring multiple times. Ramsi Ouro-Akondo, junior, hit two free kicks off the post, one of which Quintero got a touch to push it off the bar.

Only a couple games after beating Minneapolis Washburn, debatably best team in Minnesota, the Lakers season is now over.

Hopkins now goes on to the semi-finals of the section 6AA tournament, and it won’t get any easier.

They face the St Louis Park Orioles, currently the second best team in the state, according to MN Soccer Hub. The Orioles have a record of 12-1-1, with their one loss coming to Washburn.

The Royals and the Orioles faced off in the very first game of the year with SLP coming away with a home victory 2-0.

Both teams have immensely improved since their August matchup. Now, the winner of the rematch will go on and play for a chance to go to state, at US Bank Stadium.