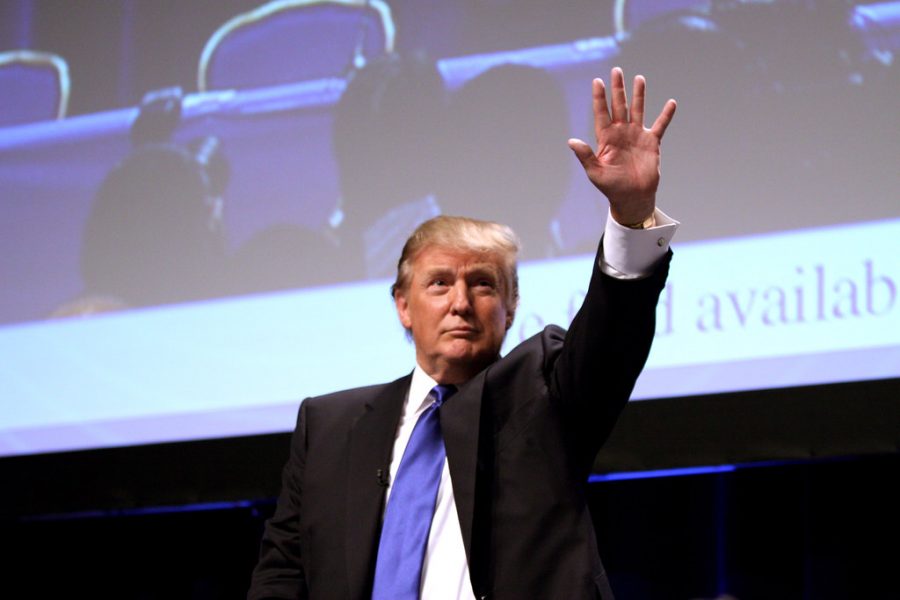 Idiot, bigot and racist are a few of the names used to describe Donald Trump, one of the most controversial points of discussion amongst students at HHS, and now they have the opportunity to see the man of many names.

On Oct. 10, Trump is coming to campaign in the Target Center. While a majority of students at HHS are more left-leaning, a few conservative students have already reserved multiple free tickets for his arrival.  However, there is also a collection of students who are in favor of Trump’s presidency, but they are afraid of what others will think of them.

Jacob Frey, mayor of Mpls., said that under normal circumstances he would welcome a president’s appearance, but he believes these to be special circumstances. Right now Frey is prioritizing the safety of Minneapolis residents as the event could become very heated and stressful.

While Frey can’t prevent Trump’s arrival, he is far from giving him a warm welcome.

“Our entire city will stand not behind the President, but behind the communities and people who continue to make our city — and this country — great. While there is no legal mechanism to prevent the president from visiting, his message of hatred will never be welcome in Minneapolis,” Frey said.

Frey certainly speaks from a place of truth when he said that the city will not stand behind Trump, as Mpls., is mostly a liberal city. Although, he seems to be ignoring the smaller conservative population.

Matthew Stuessi, junior, is a more right-leaning student that will be attending the Trump rally.

While Steussi is usually vocal about his opinions, he knows that he is in the minority at HHS and believes that the conservative population of students is underrepresented.

“I think that there is certainly a biased left influence at our school. Most of our teachers are liberal and the YAF club is outnumbered by clubs with more liberal influence,” Stuessi said.

Stuessi usually has one on one discussions with different liberal students, but he finds that it’s hard to avoid others joining in on the conversation. Stuessi thinks that he often has to defend himself, rather than rationalize his opinions.

“I’ve had people call me stupid for my beliefs, instead of discussing why I have that viewpoint. I have friends who aren’t going to the Trump rally because their scared of being labeled racist by their parents or other students. The only reason I am not, is because I’ll be surrounded by my friends,” Stuessi said.

On the other side of the political spectrum is Josie James, junior. She is a member of the Young Democrats Club and is not a fan of Trump’s policies as she believes he is dishonest, unethical and disrespectful towards women and minorities.

However, she believes that students at HHS are capable of civil discussion.

“Hopkins seems to be more liberal, but it’s hard to know what the actual ratio is because I know plenty of conservatives, it’s just that many students on both sides are afraid to express their beliefs,” James said.

Both students think that the main issue our school faces is that both left and right students rather surround themselves with similarly minded people and assign labels to the other side, rather than talk about their actual values.

However, with the rally, students have the opportunity to peacefully represent both of their respective parties.

“Even though I am not a Trump supporter, I don’t think others should be afraid to express their support for him. Dem’s club values the freedom of expression and students at HHS are very good at respecting each other’s opinions even if they differ. Fear shouldn’t come with standing by anyone, but disagreement and conversation should be expected,” James said.