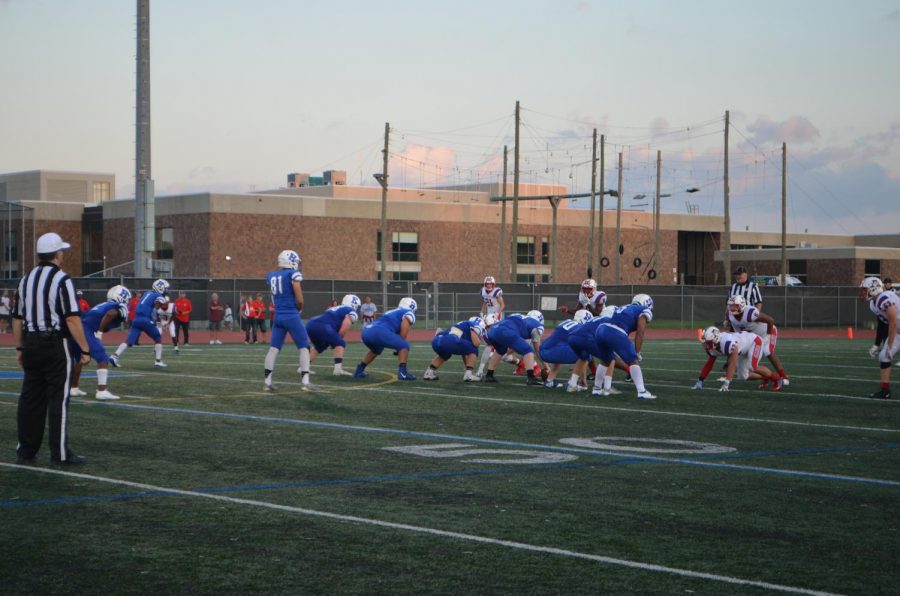 Noah Kim, senior, lines up for a snap in Armstrong territory. The Royals lost the home opener to the Falcons.

Yesterday the Hopkins Royals football team didn’t show up to the best of their ability at the first home game of the season.

After coming off of a 21-14 win against Apple Valley, the team looked strong and showed promise to do well the rest of the way.

Sadly, they lost 37-11 against the Armstrong Falcons, which was dominated by their opponent all game. Armstrong took a commanding 20-0 lead in the first quarter.

A lot of factors played into the 26 point loss. The Royals had 6 fumbles, 5 recovered by the Falcons, 8 more bad snaps along with 1 more mishandled by the quarterback Noah Kim, senior.

The offense would turn the ball over and give the Falcons good field position to score. Jake Brietbach, the Falcon’s quarterback, took advantage of nearly every turnover.

Breitbach threw for 4 touchdowns and passed for 220 yards against a defense that didn’t allow a touchdown a week before.

Breitbach is currently 5 months removed from a torn ACL he suffered in a basketball game.

Although, the Royals are already looking at things to improve on a day after the game.

“We need to clean up the little things and be able to secure the ball every possession. We also don’t have the most experienced guys on the team, and it’s natural to get those pre game nerves. I think that they showed on the field, and that’s something we need to improve on,” Kim said.

Despite the results not being as hoped, the Royals keep their head up all game.

“I think our guys showed no quit and we didn’t give up until the final whistle,” Kim said.

Looking on to next week, the Royals hope one of their top receivers Ty Bennett, senior, returns to the field after being out with a concussion.

Going all the way to Forest Lake next week, the hopes are high especially if they can get Bennett back, who is a big vertical threat that takes the top off of the defense.

“We will be more locked in this week and get quality reps in at practice,” Kim said.