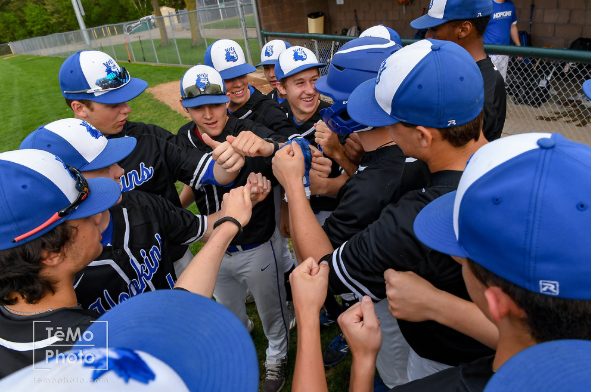 The Royals in their pregame huddle before their game against Edina this year. The Royals take on the Trojans tonight at 6:30 pm.

The Royals have been rising to the occasion all year. Hopkins is currently ranked ninth in the state which is the same position they were at in the preseason rankings from GAMEBREAKER.

It goes without saying that, in recent history, the Royals have not been very good, though this year is different. For a very long time this group of guys has been looked at as Hopkins’ best shot at a state championship and they are not disappointing.

After starting the season a bit off, going 6-3 in April, the Royals have turned into a fantastic team in the month of May.  Currently on a four game win streak and have lost just two out of the last 10 games, the Royals look to close out this season with not only a win, but a Lake Conference crown as well.

The last time these two teams met was earlier in May, on the 14th.  That was one of the two games Hopkins lost. Though it was a very competitive game, coming down to the final inning. Going into the seventh it was tied at four until senior, Brennen Albert scored the game winning run after hitting a double earlier in the inning.

Albert is the Trojans leading hitter with 21 hits and a batting average of .362 which also leads the team.  Albert is also leading Wayzata in home runs with two, and RBIs with 15.

Though Albert is the Trojans leader in home runs, their leader in total runs is senior, Keegan Nickel with 17 runs.

NDSU signee, senior, Wyatt Nelson is the Royals leader in hits and runs.  Nelson has 27 total hits and 19 total runs. Nelson’s batting average is currently second on the team at .458.

The Royals most efficient hitter though, is Luke Polyak, senior, with an impressive batting average of .581.  Polyak has the fourteenth highest batting average in the state among hitters with at least 15 at bats.

Jake Perry, sophomore, is Hopkins’ leader in RBIs with 15.

The Royals will take on the Trojans on May 22, at 6:30 pm at the Lindbergh Center baseball field.