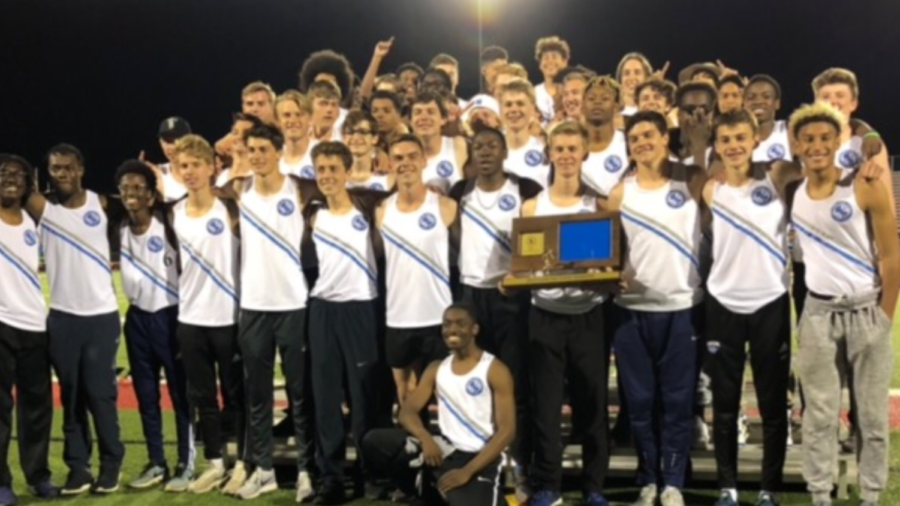 The team poses after the victory. This is the second time in program history the Royals won true state.

As for Joe Fahnbulleh, the 2019 state championship isn’t the only hardware he took home this past season. Fahnbulleh won the 2018-2019 HHS Apollo Award, an award given out to the best male senior athlete.

“It feels really good being recognized by other people than my friends,” Fahnbulleh said.

“Other coaches took notice of me as well which is a really good feeling.”

However to win True Team State, it takes everybody. Hopkins showed that their team is more than just the superstars.

In the 400 meter dash, the Royals had three runners finish in the top ten. Seniors Sam Leervig, Wyatt Lubarski, and Ben O’Black all posted times under 52 seconds.

Fahnbulleh won both the 100 meter dash and 200 meter dash with Jaylen Champion, senior, finishing in seventh place for the latter.

Hoeft took home some dubs himself. The University of Minnesota recruit finished in second for the 1600 meter run and took first place for the 3200 meter.

Other seniors in Penn Sagedahl and Alek Wormuth also posted solid times during each of those races.

Seniors weren’t the only group of athletes that deserve recognition. Sophomore George Jackson won the 110 meter hurdles and finished in second for the 300 meter hurdles.

Hopkins closed out the state championship with an absolute dominant display in the long jump. Jackson in second, junior Ty Bennett in fifth, and Champion in eighth.

The Royals take home their third state championship this year, with each basketball team taking home crowns in March.