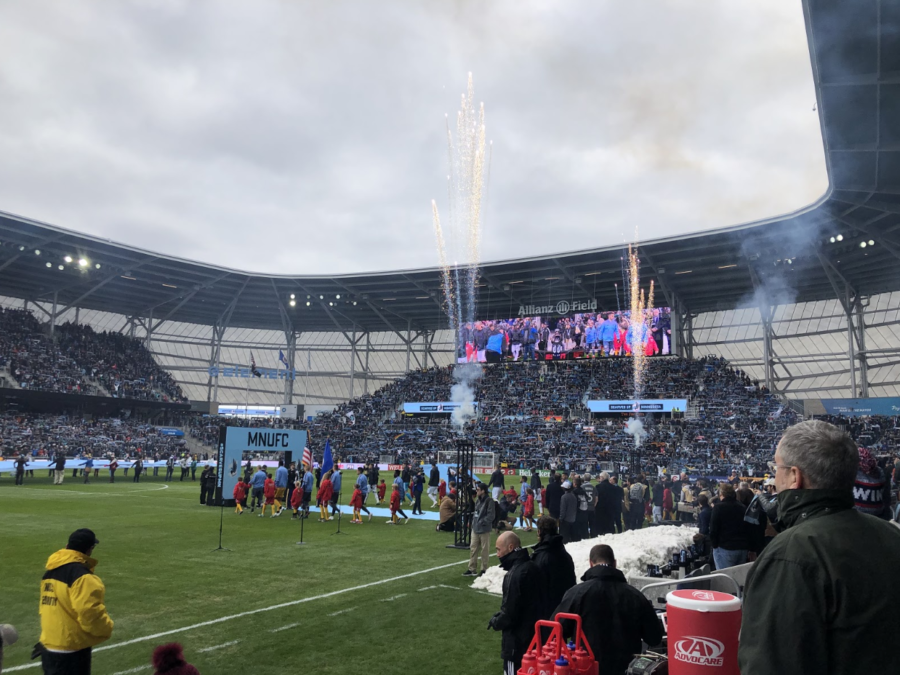 Fireworks going off at the inaugural game at Allianz field versus NYC FC. The Loons tied them 3-3.

On Oct. 23, 2015, team owners announced that MN United would construct a stadium on the 35-acre Saint Paul site. After over 20 months of work, the team unveiled the Loon’s $250 million privately financed new home, Allianz Field.

In late Nov. 2015, the club hired a global design and architecture company by the name of Populous. A few days later, Populous partnered with Mortensen Construction to plan the build of Allianz Field.

Mortensen Construction is no rookie to building large landmarks in the Northstar state. Mortensen built U.S. Bank Stadium for the Minnesota Vikings in 2014–2016, and worked with Populous on three other big name Twin Cities sports facilities. None other than Target Field, TCF Bank Stadium, and Xcel Energy Center.

The Loons now become the sixth Minnesotan team since the start of the millenia to be given a new home.

The die-hard fans will now get a closer feel to the game than they’ve ever experienced. Front-row seats are now a bare 17 feet from the sidelines. The farthest seat, which is located on the east-side second deck, is still only 125 feet from the sidelines which is closer to the pitch than TCF Bank Stadium’s front row to its respective sideline.

This brand-new stadium is built for the north. The facility’s outer layer completely blocks wind and its 360 degree roof blocks over 90 percent of all seats in the stadium from precipitation and any other debris. The canopy is dramatically curved, much to the likes of European stadiums.

Allianz Field is set to host the International Gold Cup this upcoming June. This includes hosting the U.S. Men’s National team’s opening game. The stadium could also land early spring and/or late fall games for U.S. national teams that would look forwards to a home-pitch advantage against southern opponents.

Mollie Tankenoff, junior, attended the opening game and recalled that the game held a thrilling ambience.

“The game atmosphere was simply amazing. The fans were really excited, the stadium looked beautiful and had an electric energy fueled by continuous songs/chants/cheering,” Tankenoff said. “Unlike any sporting experience I’ve ever witnessed.”

Tankenoff also believes the Loons and their fanbase are here to stay.

“I believe that the Loons fan base will be very solid for many years to come. The sport itself is in high demand, the Loons have upgraded their talent level to compete, the new stadium is amazing, and the sport is affordable, especially compared to NFL, MLB, NBA, and the NHL,” Tankenoff said.

With a crowd of over 19,000 people at the opening game, Allianz Field shined as soccer’s newest star. The $250 million stadium was put on full display as the hometown club battled against New York City FC in a highly contested 3-3 draw.