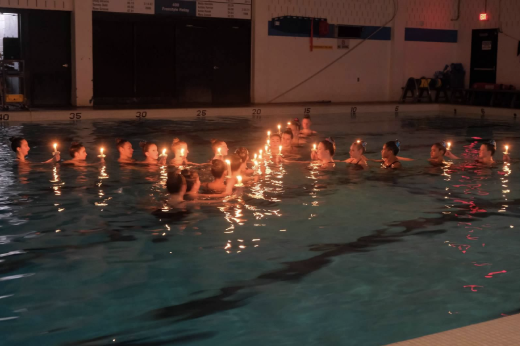 The Synchro team in formation at the competition.

Every year the school’s synchronized swimming team has a show for family and friends, where they display the routines they have developed so far in the season. This year’s show was on Saturday, April 27th, and went off without a hitch.

There were 14 routines; a combination of solo, duet, trio and team routines at varying lengths. Some of the music featured was from Legend of Zelda, Pirates of the Caribbean and Lizzo.

In addition to being a display of their work, the annual show is also a graduation-esque ceremony for the outgoing seniors, many of whom have been doing synchro since seventh grade. During intermission there was the traditional candlelight ceremony, which is a very sentimental moment for friends and family alike.

“It’s always fun to show our friends and family how hard we’ve been working throughout the season, a personal favorite moment this year was candlelight, especially because this was my last time doing it,” said Lola Brown, senior.

During intermission, the tradition of a “boy’s routine” was upheld, which is when friends of girls on the team scrap together a routine over the course of a few days.

The synchro season is in full force, with the next routine meet being at home on Tuesday against Eden Prairie.