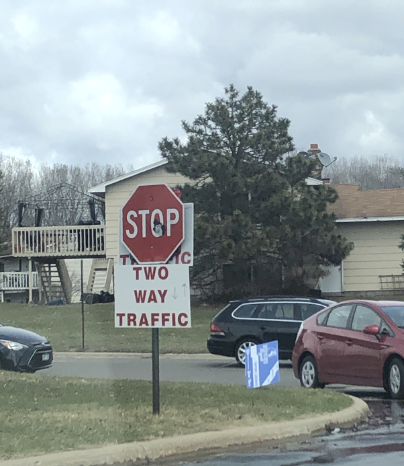 HHS parking lot exit made into an entrance as well. The parking lot returned to normal as of April 18.

Conditions were significantly worse last week for students and parents who have to traverse Hopkins High School’s chaotic parking lot every day after school.

Fencing around the new cafeteria construction area went up on Monday, April 9, and then expanded, closing off the normal entry lanes in the front parking lot.

According to various students, morning traffic wasn’t especially worse than usual, as students arrive over a longer period of time, limiting congestion.

However, after school, there were two staff members directing traffic towards the exit, at times even giving parents and students verbal direction. One student was seen running over a traffic cone, which got stuck under their car as they drove away.

Though pick-ups are exclusively supposed to happen in the Lindbergh parking lot, many parents who were entering the lot were met with long waits as students tried to enter the exit lane, blocking the entryway.

There a general aura of confusion and frustration, and an uptick in aggressive driving strategies frequently used by students. The bulk of the line was gone by roughly 2:55, about 10 minutes later than usual.

Luckily, the parking lot has returned to normal as of Monday, April 18th, as the entry lanes were closed in order to lay down water lines. This situation raises questions on how Hopkins’ already frustrating parking lot will cope with further changes likely coming.