Review: The Boys take down the Panthers in MSHSL State Tournament Final 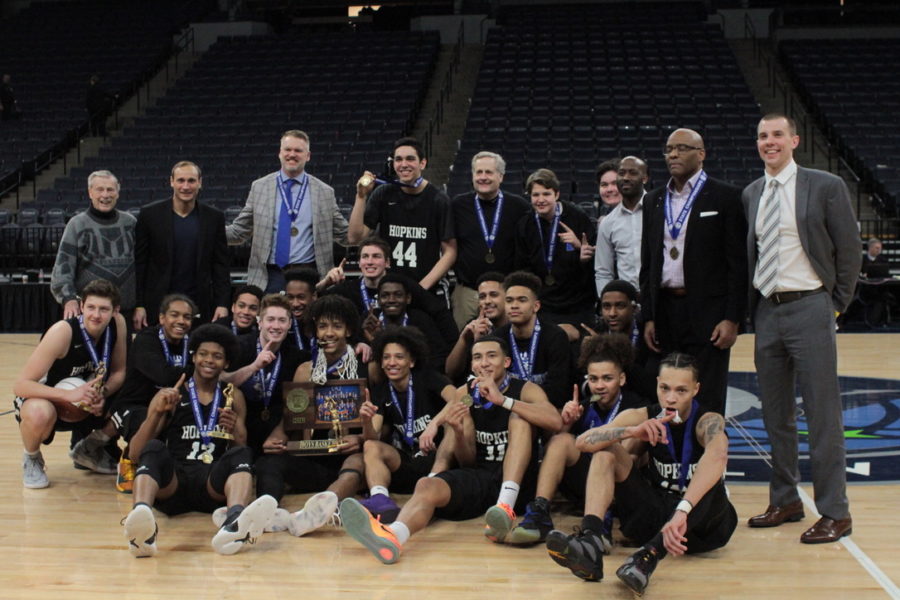 THE ROYALS ARE STATE CHAMPIONS ONCE AGAIN.

This matchup was a very competitive one. That goes without saying due to the fact that it was the MSHSL State Tournament final, but it appeared as though each team would do whatever it takes to stop the other from scoring.

In the first three minutes of the game, only four points were scored, all coming from free throws made by Zeke Nnaji, senior.

Early in this game, Dane Zimmer, senior, was starting to show out.  With nine rebounds through the first 12 minutes, Zimmer was making it very hard for the Lakeville North Panthers the get second chance points.

The Panthers were trying to move off the ball so much throughout this game and it worked a number of times, but the defense from the Royals was not letting that become a trend.

So much of that was due to Zimmer’s fantastic performance.  Though Zimmer only had two points in the first half, he was for sure making up for it in every other stat category.  Zimmer went into the break with an impressive 12 rebounds, an assist, a block, and a steal.

The Royals leading scorer through the first period was of course Nnaji, with 12 points. Nnaji was shooting two for six and two for four from three, but where he lacked in fields goals, he certainly compensated shooting six for six from the free throw line.

The Panthers were shooting better than the Royals in one category, field goals, in which Lakeville was only shooting one percent higher, 30 percent to Hopkins’ 29 percent.

The Panthers leading scorer was senior, Jack Rusch, with eight points through the first.

The Royals started to find their rhythm late in the first, with Kerwin Walton, junior, draining two straight threes, and Nnaji getting fouled and sinking both free throws. The Royals went on a seven to four run the finish the first half.

Hopkins was taking advantage of 88 percent of their free throws in the first half, while the Panthers were shooting a mere 50 percent from the charity stripe.  That was a large factor in the Royals 27-17 lead headed into half time.

The Panthers were unable to finish the first half with a basket as the Lindbergh Loonies tricked them into forcing a shot early.

To start off the second half, the Panthers go on a seven zero run before Nnaji makes a tough turn around lay up.

After that run for Lakeville, it appeared that no one could make any shots. With just under 11 minutes left, it was still knotted at 26.

Andy Stafford, senior, makes a lay up to end a span of about five minutes in which neither team scored. With that lay, the Royals went on 12 to zero run to open up the lead to 12.

Nnaji got a great block which lead to a sweet pull up three from Walton. Nnaji goes right back on defense for another block, this time, Zimmer makes a huge momentum swinging and-one layup. Later Walton kissed a floater off the glass for another and-one, though both went through contact the make the basket, neither could convert on the free throws.

The Royals turned the ball over a very high amount of times, with 11 in the first half and nine in the second, Hopkins racked up 20 total turnovers to Lakeville’s 12.

Nnaji and Zimmer were a two headed monster on the glass in this game, with Nnaji’s 12 and Zimmer’s astounding 21, the two of them combined for seven less than the Panthers had as a whole.

With a bit over three minutes remaining, Lakeville was in foul mode, in hopes that Hopkins would miss every free throw. With 1:24 remaining, the Loonies had the Panthers ‘start the buses’ and ‘beat the traffic’.  Two chants they used on East Ridge when everyone knew the game was over.

The last time Hopkins made it to the state tournament was in 2016. Which saw the Royals meet the Panthers for a second straight year.  In 2015, the Panthers took home the championship, but in 2016 the Royals got their revenge, and in this rematch, Hopkins was victorious once again.

Zimmer, Walton, and Nnaji all made the All-Tournament team. Three players from Lakeville North made the team as well, Rusch, Tommy Jensen, senior, and Tyler Wahl, senior.