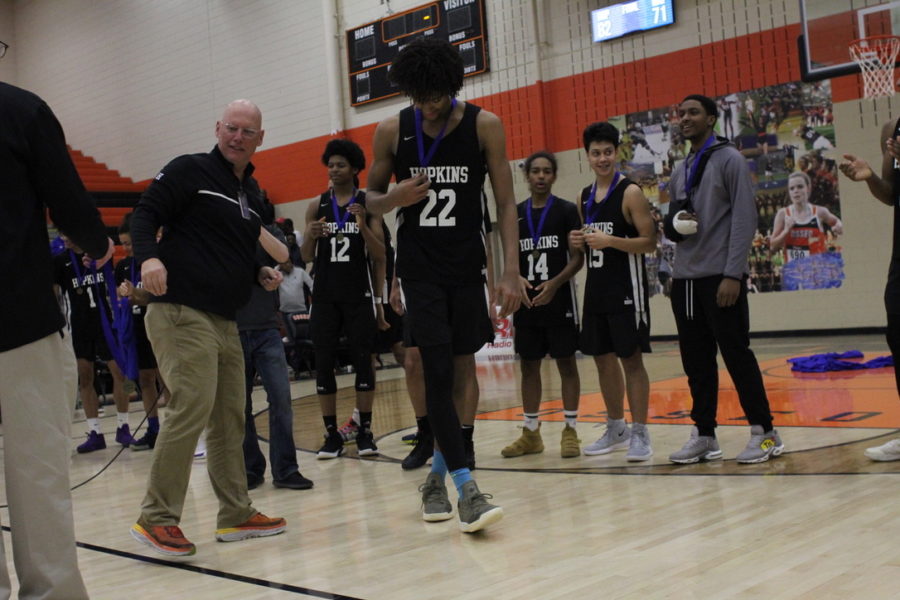 Zeke Nnaji, senior, gets his section championship medal after defeating Wayzata. The boys look to repeat what happened in the state tournament in 2016.

The Royals are headed to the MSHSL state tournament for the first time since winning it all back in 2016.

After defeating the Wayzata Trojans in the section 6AAAA final with a score of 82-71, Hopkins holds the second seed in the state tournament.  Behind Park Center, the Royals will take on the seven seed Cambridge-Isanti (CI) Bluejackets in the quarter-final.

CI finished their regular season with a 14-12 record and fourth in their conference going 8-5 against Mississippi 8 teams.

The Bluejackets’ leading scorer is junior guard Henry Abraham, who averaged 22.8 points per game (PPG) in the regular season.

Abraham’s season high in scoring was a 39 point performance in a home victory over the Coon Rapids Cardinals in mid-December.  CI finished that outing with a 34 point victory.

The Bluejackets’ largest victory this regular season was a 44 point blow out against the North Branch Vikings in early January.

CI’s section tournament was fairly easy for them, after a 20 point defeat over Andover, the Bluejackets narrowly made it past the semi-final in a three point victory over Duluth East. Then finishing out their bid for the state tournament with a 10 point win over the Blaine Bengals in the section final.

The Bluejackets prevented the Bengals from getting hot on offense with their 2-3 zone defensive scheme much like Jim Boeheim and the Syracuse Orange.

The Royals are going into their matchup after a few recent victories. The girls basketball team took home the state championship over this past weekend, along with the leader of the boys team, senior forward Zeke Nnaji, recently winning the Star Tribune Metro Player of the Year.

Hopkins will take on the Bluejackets at the Target Center at 2:00 pm on Mar. 20.