Review: Girls basketball caps off undefeated season with a ring 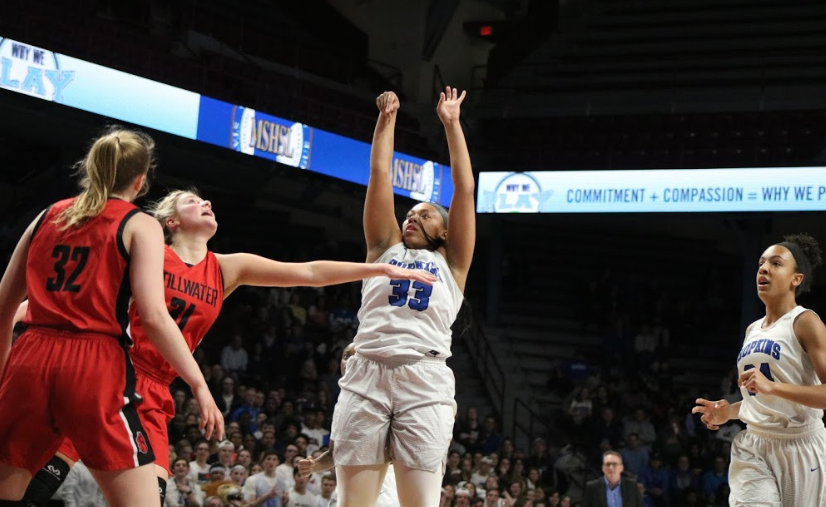 Dlayla Chakolis, senior rises up for a jumpshot in the win against Stillwater. The Royals won their first state championship since 2015.

After a trio of runner-up finishes, the Hopkins Royals finally break through the glass ceiling and capture the Class 4A state title with a dominant 74-45 victory over the two-seeded Stillwater Ponies.

Even though the Royals won by nearly thirty points, the first half looked like the outcome could go either way. In a defensive struggle, both teams shot below 40% from the field and missed many prime opportunities to get on the scoreboard.

On offense, Hopkins shot 37% from the field and a dismal 5-13 from the free throw line in the first half. Dlayla Chakolis, senior, made only one first half field goal while Paige Bueckers, junior, who was not 100% going into today’s game due to illness, only scored eight points.

The Royals also had difficulty stopping Stillwater’s star players, sophomore Alexis Pratt and senior Sara Scalia, who accounted for the Ponies first 16 points of the game and finished the half with 10 and 14 points respectively.

For the first time this season, Hopkins trailed entering the halftime break, as Stillwater took a two-point advantage into the locker room with the score at 27-29.

Head coach Brian Cosgriff admitted that his team’s first half performance was subpar and that the team needed to improve monumentally in the second half if they wanted to come out on top.

“That was our worst half by far this year and we needed to start making our free throws,” said Cosgriff.

Something in Cosgriff’s speech must have lit a fire under the team, because after Stillwater took a 35-30 advantage, it seemed like the Royals couldn’t miss a shot if they tried.

The Royals went on a 12-0 run that was classic second-half Hopkins basketball. Stalwart defense by every single Royal led to easy transition buckets.

“Second half I told myself I need to work on the defensive end first and then my teammates would hit me in transition, and that’s exactly what they did,” said Chakolis.

When all was said and done, the Royals went from zero to 100 in the matter of minutes and went on an impressive 42-7 run to leave the Ponies in the dust.

The run featured spectacular many moments that whipped the Royal faithful into a frenzy, from junior Kayla Adams splashing home three consecutive three-pointers to Bueckers finding eighth grader Taylor Woodson with a beautiful behind the back assist in transition.

Due to her illness, this game was far from the Paige Bueckers Show that she had put on against Lakeville North and Centennial in the last two tournament games. All eight Royals that stepped on the court made a major impact.

“Paige was sicker than a dog today and she really toughed it out and the other people stepped up huge, and it was more than just a Paige show this year,” Cosgriff said.

Four players, including Bueckers, hit double figures in the scoring column, with Maya Nnaji producing a double-double effort with 18 points and 10 boards on the night. Freshman Amaya Battle nearly recorded a triple-double with nine points, nine rebounds, and 11 assists.

In terms of team play, Stillwater was the polar opposite of Hopkins. The Ponies relied on Pratt and Scalia to score nearly all of their points. The two stars accounted for 40 of the team’s 45 points.

The Royals capped off their first undefeated season in the team’s history and won their first state title since 2015. And with four starters returning next, the future looks bright for the new state champions.