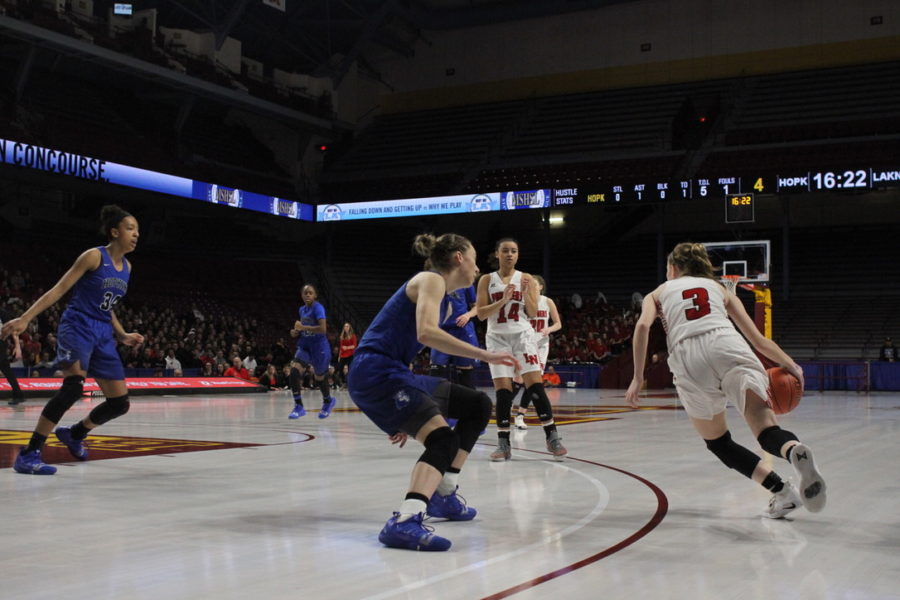 The Hopkins Royals took care of business in their state tournament quarterfinal game against the Lakeville North Panthers with a strong 68-46 victory at the historic Williams Arena.

After Lakeville North jumped out to a small lead in the opening minutes, the Royals went on a 10-0 run midway through that was led by eight straight points by Paige Bueckers, junior.

The Royals went into the halftime break with a 33-21 lead. Bueckers led all scorers with 13 points in the first half, and Maya Nnaji, freshman, tacked on 10 points with six boards to boot.

Back-to-back and-ones by Bueckers and Dlayla Chakolis, senior, put the game away midway through the second half, and the reserves were put into the game with three minutes left to play to signify the end of the game.

Bueckers led the charge for the Royals with 31 points, with Chakolis and Nnaji each adding 13 points in the victory.

Lakeville North came into the matchup boasting one of the best players in the state, junior guard Lauren Jensen, who entered the contest averaging 27.4 points per game. However, she was stifled by the aggressive defensive play of the Royals and could only muster nine points.

The only Panther who seemed to crack the Royals’ defensive code was Ani Tschida, senior, who put up 20 points in the loss, including her 1000th career point.

The Royals will face off against either the fourth-seeded Centennial Cougars or the fifth-seeded Maple Grove Crimson in the state tournament semifinals Thursday night at 6 P.M.