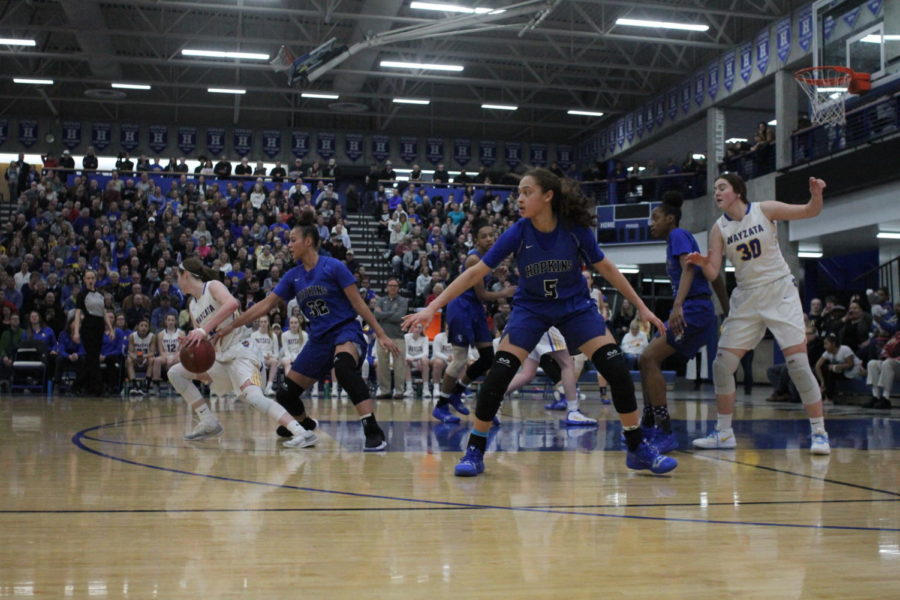 Amaya Battle, freshman, looks on as the Royals play defense. Battle and the Royals take on Lakeville tomorrow night.

The Class 4A girls state basketball tournament will kick off tomorrow with a quarterfinal matchup between the top-ranked Hopkins Royals and the Lakeville North Panthers.

Hopkins enters the state tournament on a tear of epic proportions. After an undefeated regular season, the Royals advanced to the state tournament by completely dominating the Class 4A, Section 6 tournament. The squad took all three games by at least 15 points, including a statement win over their biggest competitor in Class 4A, the Wayzata Trojans, in the section finals.

The Royals have been aided by the depth and talent of their roster, the relentless pressure of their defense and the star power of junior guard Paige Bueckers, who was just named the Metro Player of the Year by Star Tribune.

Lakeville North’s road to Williams Arena has been a bumpy one, but the Panthers persisted to win the Class 4A, Section 1 championship and advance onto the state tournament.

The Panthers enter Wednesday’s contest with a record of 18-11 and have been a bit spotty throughout the season, but they have come up clutch and have been able to upset many opponents in tight games. Lakeville North has handed losses to Eastview and Centennial this season and eeked out a shocking defeat of top 10 ranked Farmington Tigers in the section finals.

Lakeville North has one of the best players in Minnesota, junior guard Lauren Jensen. She has averaged 27.9 points per game this season and was named to the Star Tribune All-Metro first team.

These two teams faced off against each other early in the season, with the Royals taking their Nov. 27 contest by a score of 83-41.

This game tips off at 10 A.M. on Wednesday at Williams Arena. The winner will advance to the semifinals to face the winner of the Centennial vs. Maple Grove quarterfinal.