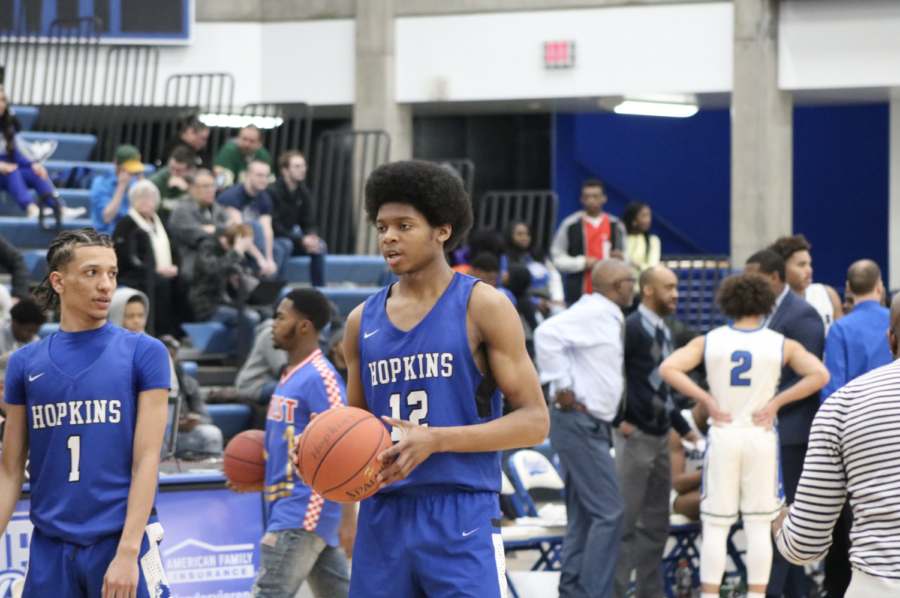 Kerwin Walton, junior, in a win against Minneapolis North. The Royals are the one seed in their section.

Hopkins plays their first section playoff game tonight, against the Saint Louis Park Orioles. It is the section semifinal, and the Royals had a by for the first game. After finishing the regular season with an away loss to Eden Prairie, the Royals look to learn from that loss and defeat the Orioles.

SLP is 18-8 after a first round, 24 point defeat over the Minneapolis South Tigers on Mar. 5.  The Orioles leading scorer is sophomore, Paris Johnson, with 15.9 points per game (PPG), and leads the team in rebounds as well with 9.6 rebounds per game (RPG).

Johnson’s season high is a 27 point performance in an 18 point victory over Richfield.

The Orioles largest win this season is a 28 point blow out also against Richfield.  SLPs worst defeat was a 37 point loss in an away game against Edina in early January.

The Royals loss to the Eagles was a tough one, despite some tough calls and no calls, Eden Prairie ended their regular season with a win, and Hopkins ended it with a loss.

With a seven point loss, the Royals lost a good player to a stupid mistake. Sophomore, Andre Gray, after the loss, punched a wall and broke his hand.

Gray has been a great bench piece for the Royals this year, averaging 4.2 PPG, and a great defensive presence.

The Royals face off against the Orioles tonight at 5:00 pm at Osseo High School.