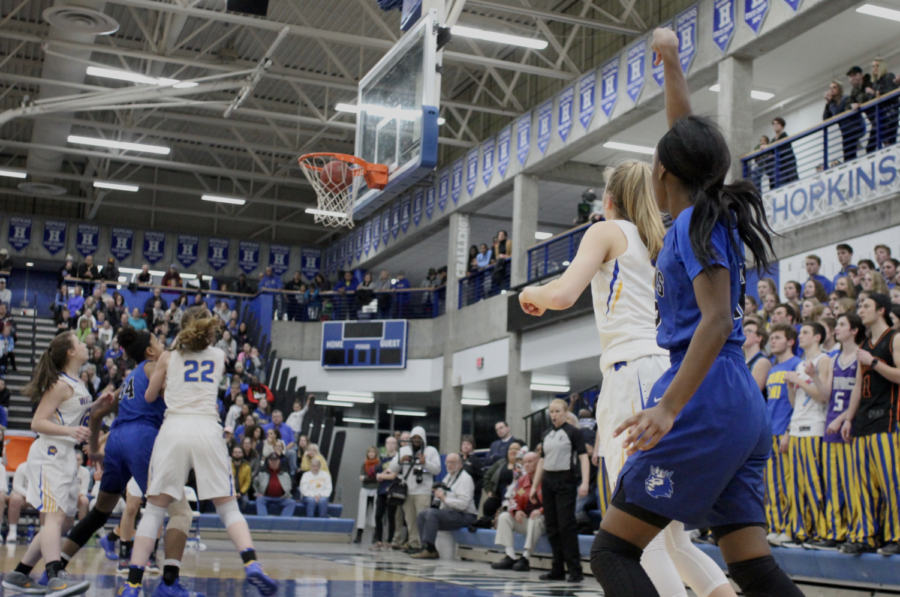 Kayhla Adams, junior, fires up a three from the corner. The Royals took down Wayzata to advance to state.

The Hopkins Royals girls basketball team finish their season undefeated by beating the Wayzata Trojans by a score of 77-60 to win Section 6AAAA and secure a berth in the Class AAAA state tournament.

Hopkins earned their spot in the section final with two dominant performances against Minneapolis Washburn in the quarterfinals and St. Louis Park in the semifinals. The team standing in the way of their fifth straight state tournament appearance was Wayzata, who was out for revenge after getting swept in their two-game regular season series.

The top two teams in Class AAAA traded buckets early, but Hopkins’ utilized their defensive prowess to gain the upper hand midway through the first half. The Royals’ signature full-court press scheme, smart double teams in full court and half court sets, and a boatload of steals from star guard Paige Bueckers, junior, sparked a run leading to a double-digit advantage.

The teams went to the locker room with the scoreboard reading 37-25 in favor of the Royals. Veteran leader Dlayla Chakolis, senior, led Hopkins with 15 first half points.

Wayzata came out of the halftime break with a bit more fire and put some pressure on the Royals. Annika Stewart, junior, opened up the half by scoring the Trojans’ first seven points and a three from Mara Braun, freshman, put Wayzata within single digits.

However, a seven point deficit is the closest Wayzata would come to catching the victors. The hopes of a Trojan comeback were quickly dashed when Hopkins went on an electrifying run that was capped off by a weak hand and-one layup by Taylor Woodson, eighth grader.

A Wayzata press put into place with six minutes left could only hope to contain the Royals and two Trojans fouled out of the game in its waning moments. Hopkins shot 13 free throws in the second half.

When all was said and done, the Royals clinched their fifth consecutive state tournament appearance and ninth in the last 10 years. Bueckers and Chakolis dropped 25 points apiece to lead the Royals to victory.

Looking ahead to next week’s state tournament, the girls will look to break through and take home the state title for the first time since 2014/2015. The road to the state title begins this Wednesday at Williams Arena.