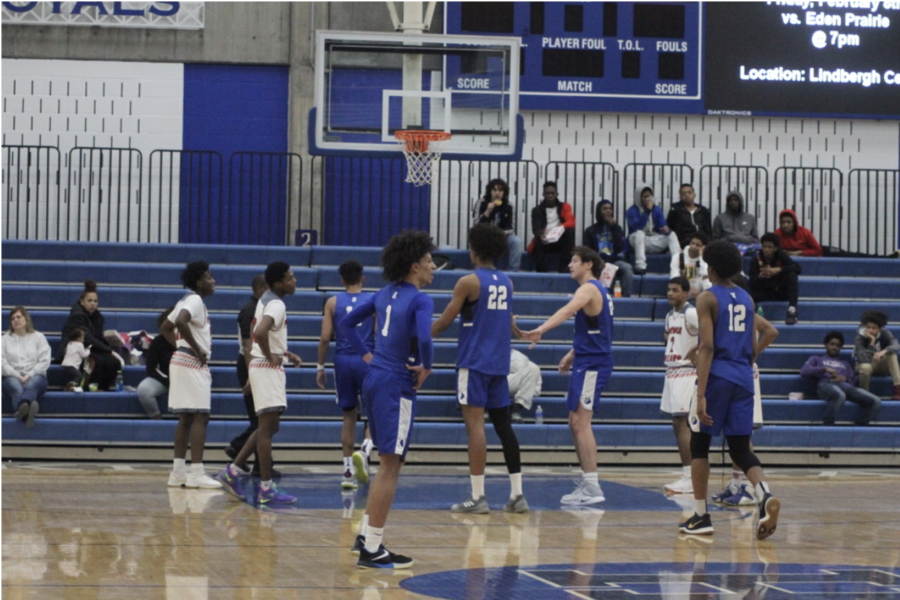 Zeke Nnaji, senior, taking a free throw in the Royals victory over Minneapolis Henry. Nnaji is a candidate for Mr. Basketball this year.

The Royals took on the Wayzata Trojans on Feb. 22.  Hopkins hosted the Trojans earlier this season and defeated them 90-80.

The Royals finished the regular season sweep on the Trojans with a 15 point victory. The final score was 84-69. Hopkins’ leading scorer was Arizona commit senior, Zeke Nnaji with 34 points, which is his season high since the Trojans and Royals last matchup.

A big factor in Hopkins winning this game was senior, Jalen Dearring. Dearring had a season high 22 point performance. With junior, Kerwin Walton getting off to a rocky start in the first half, Dearring went off. Walton had a great second half though, finishing with 16 points.

Wayzata’s leading scorer was senior, Jacob Beeninga, with 21 points, which is the same as what he scored in their last meeting.

Wayzata is currently second in the Lake Conference with a 5-3 record, and 17-9 overall, the Trojans are ranked 10th in the state. The Royals are 22-3 after their fourth straight victory, with this win, the Royals stay in first place in the power rankings for 4A MN boys basketball.

The Royals will finish their regular season being hosted by the Eden Prairie Eagles.  The two met earlier this season and that game saw Hopkins win by a seven point margin.

Since that meeting on Feb. 8, the Eagles are 3-4 including their loss to the Royals, and their leading scorer between then and now is junior, Drake Dobbs, with over 20 points per game.