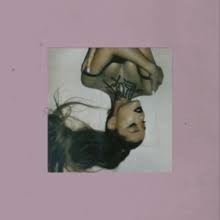 Covered up tattoos and subtweets took over social media when Ariana Grande and Pete Davidson broke up in October 2018.

Her most recent album has the same title as the single, “thank u, next”, and was released February 8. This album is full of powerhouse songs and many stabs at Grandes various exes.

Grande fans were shocked with the release of “thank u, next” because she had just released her 4th album, Sweetener, in August 2018. It is believed that “thank u, next” was dropped so early because of the emotional drama occuring in Grande’s life.

“One small step for woman, one giant leap for womankind.” The third song in the album called “NASA” begins with these famous words of Neil Armstrong, but replacing “man” with “woman to promote feminism.

My personal favorite track on thank u, next is the opening song, “Imagine.” This track gave me the first impression that Grande was seeking by showing her pure talent. In “Imagine,” Grande reaches crazy high octaves and sings beautiful harmonies that take listener’s breaths away.

thank u, next has become one of my favorite albums to listen to, also making me a huge Grande fan. I can’t wait for what music and talent would arise out of Grande if she ever gets into a complicated relationship again.