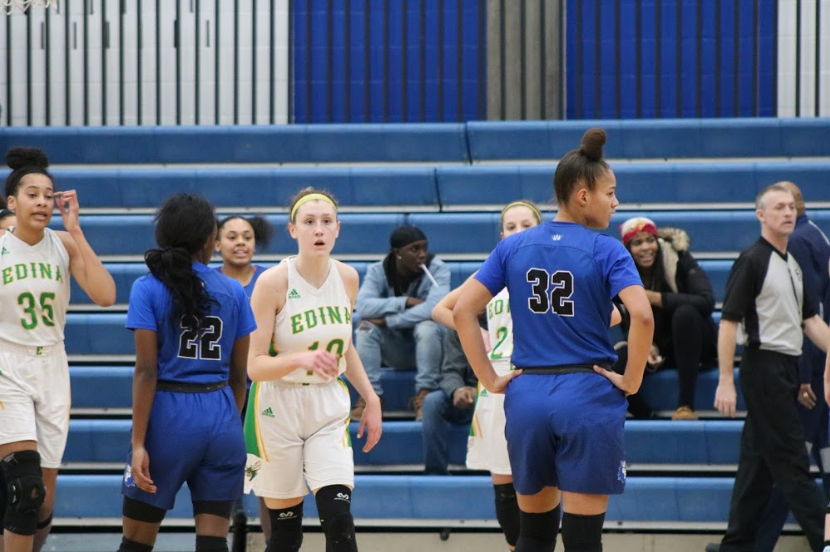 Taylor Woodson, eighth grader, in a game against Edina. The team is undefeated this season.

This Friday night, the Hopkins Royals girls basketball team will travel to Wayzata High School to take on the Wayzata Trojans in a matchup that could be the second chapter in a trilogy that concludes at the Section 6AAAA championship.

Hopkins and Wayzata come into this matchup ranked as the top two teams in Class 4A and each team has steamrolled their competition throughout the regular season.

Hopkins is coming off a 94-50 home victory over the Grand Rapids Thunderhawks last Saturday. The game was decided by halftime and featured 12 Royals players making their mark in the scoring column.

The Royals victory improved their undefeated record to 25-0 and maintained their pole position in the Class 4A rankings with that victory. Coach Brian Cosgriff has led the squad to double-digit wins in all but one of their 25 games this year.

Hopkins’ only single-digit win of the year came against this Wayzata team, an emotional 69-66 triumph on February 1 at the Lindbergh Center.

That loss is the only loss for the Trojans this season. Aside from their defeat at the hands of the Royals earlier this month, Wayzata’s campaign has been just as strong as Hopkins’. Wayzata sits at the number two position in the rankings with a record of 24-1.

The Trojans consist of four players averaging at least 10 points per game, with Jenna Johnson, sophomore, leading the charge with 15.8 points per game.

While Hopkins took the first game of their two regular-season matchups this year at home, the home-court advantage now shifts over to the Trojans, who defeated the Royals at home last year.

The contest between the two Class 4A titans tips off at 5:30 at Wayzata High School.

The Royals hosted their last home game of the regular season on Feb. 15.  Hopkins took on the Minnetonka Skippers for senior night. The Royals celebrated all the seniors final home game at Hopkins with a blackout uniform night and a 28 point victory.

The Skippers leading scorer in this game senior forward, Gavin Patton, with 17 points.  Patton is averaging 18.9 points per game (PPG). Patton’s season high in points is a 31 point performance in a 12 point loss at home to Prior Lake.

Patton is the second leading scorer on the Skippers behind senior, Cameron Steele, who is averaging 20.1 PPG.

Minnetonka is currently last in the Lake Conference with an 0-5 conference record, and 12-10  overall.

This was a big game for a few of the Royals because seniors Andy Stafford and Jalen Dearring are ex-Skippers.

Hopkins takes on the Wayzata Trojans next.  This will be the Royals penultimate regular season game.

The Trojans are currently 17-8 after their victory over the Skippers on Feb. 19.

Wayzata is 5-2 in the Lake Conference which places them at second behind Hopkins in the conference standings.

Wayzata’s leading scorer is Jacob Beeninga, senior, who is currently averaging 17 PPG.  Since their last meeting with the Royals, Beeninga has averaged 22.1 PPG including their game hosting Hopkins.

Beeninga’s season-high in points is a 36 point performance in a double-overtime loss at East Ridge, which saw a final score of 105-100.