The HHS Royals hosted the Edina Hornets to end their two game regular season series.  The Hornets took a one point victory in their first meeting this season at Edina, but Hopkins took a commanding victory on Feb. 11.Behind senior, Zeke Nnaji’s 25 point performance, the Royals defeated Edina by 11 points. Mr. Basketball finalist, senior, Jack Middleton, scored 27 points in this loss.One big reason the Hornets defeated the Royals in their last meeting was because senior forward, Charlie Haff, scored a season high, 21 points.  In the contest Hopkins hosted, Haff scored only 13 points.

The Royals host the Minnetonka Skippers in their second meeting this season. In their first game this year, seniors, Andy Stafford and Jalen Dearring made their return to Minnetonka High School.

Stafford and Dearring combined for 21 points in that 24 point visiting victory. Since their first meeting, Hopkins 7-1 including that game, and the Skippers are 4-4 including their matchup against the Royals.

Hopkins hosts Minnetonka at the Lindbergh Center on Feb. 15 at 7:30 pm. 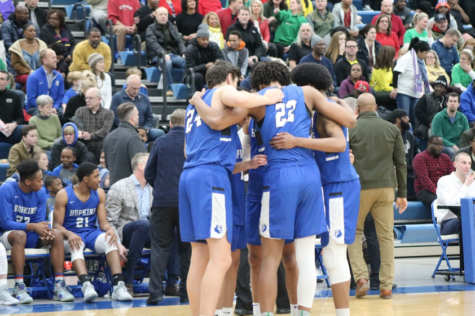 The Royals starting lineup in their pregame huddle prior to their win against Minneapolis North.